Good Morning from Stage 4 of the UAE Tour

Stage 4, The Hope Probe Stage, starts and finishes on Al Marjan Island and runs on predominantly flat roads. The post-stage press conference will be live-streamed on the UAE Tour’s YouTube channel.

Al Marjan Island, 24 February 2021 – Good morning from Stage 4, the Hope Probe Stage, of the third edition of the UAE Tour (21-27 February 2021), the one and only WorldTour race in the Middle East. The fourth stage, 204km long, starts and finishes on Marjan Island. The riders will traverse the desert to reach Umm al Quwain and Ras al Khaimah before returning to Marjan Island where a bunch sprint is expected. 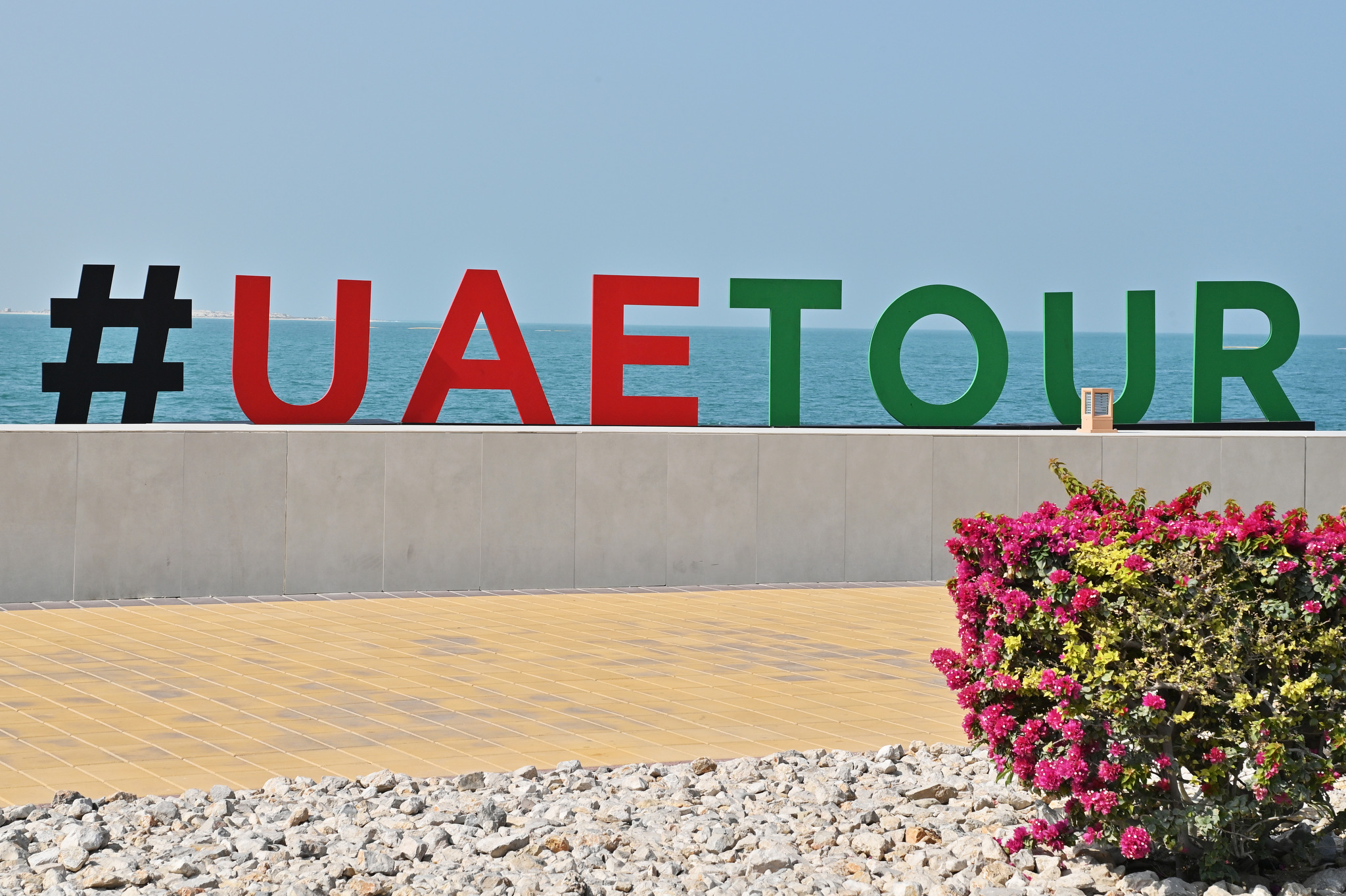 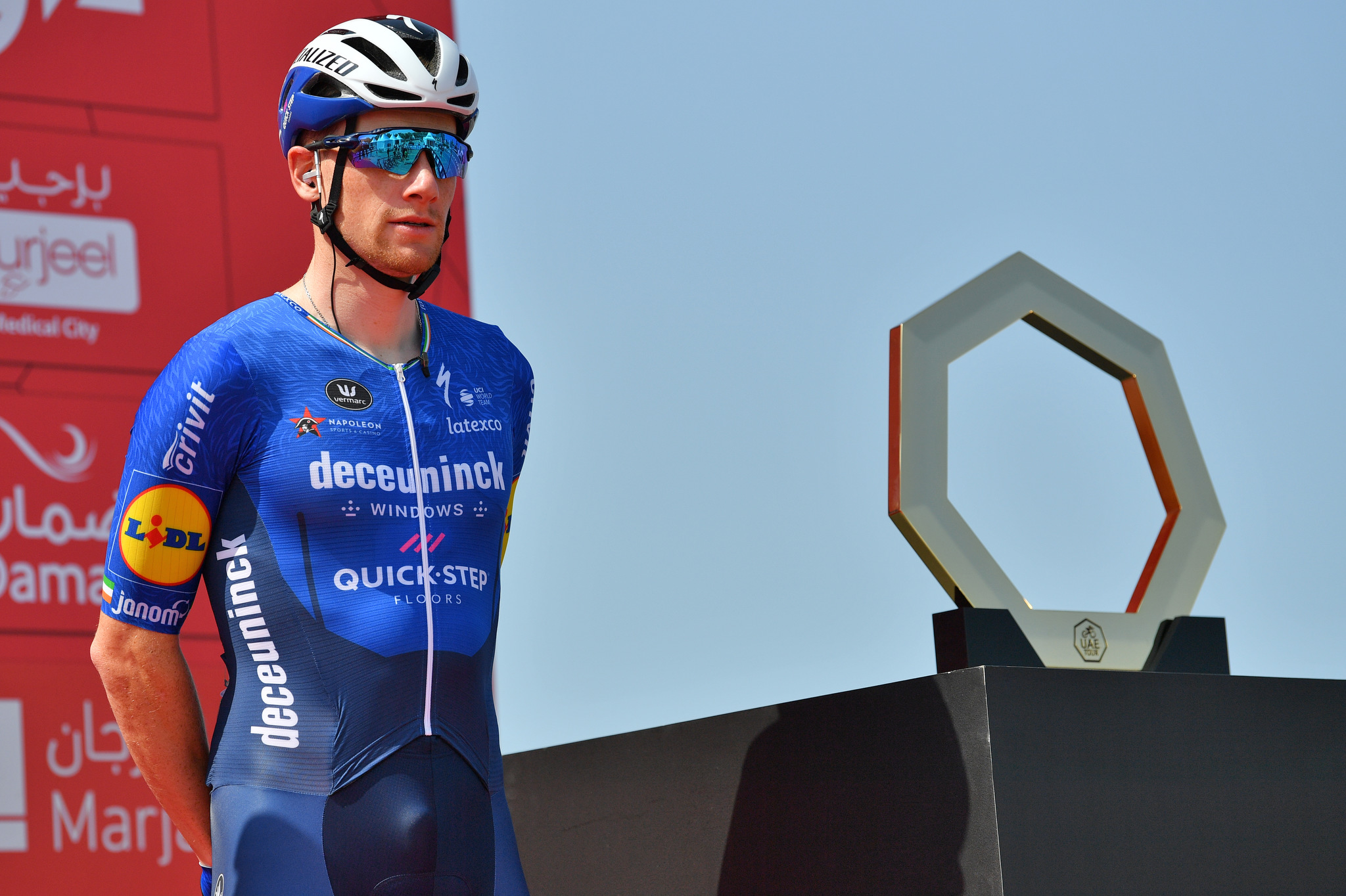 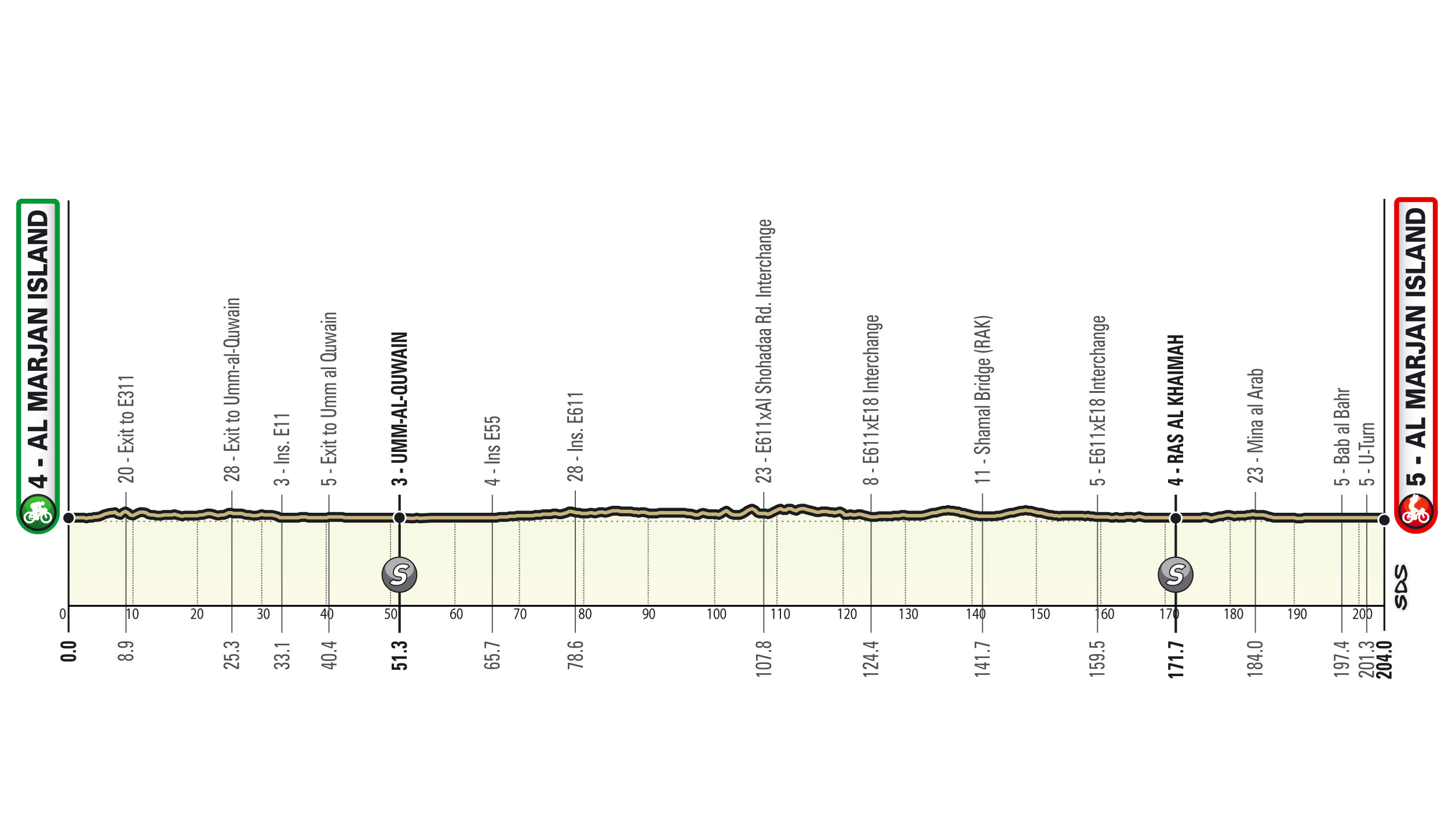 Stage 4 starts and finishes on Marjan Island. The route begins by traversing the desert to reach Umm al Quwain (first intermediate sprint at km 51.3) then heads north along desert roads to Ras al Khaimah (second intermediate sprint at km 171.7) before returning to Marjan Island for the sprint finish. The entire stage follows smooth, wide and predominantly straight desert roads that may be affected by the wind (and even sand). 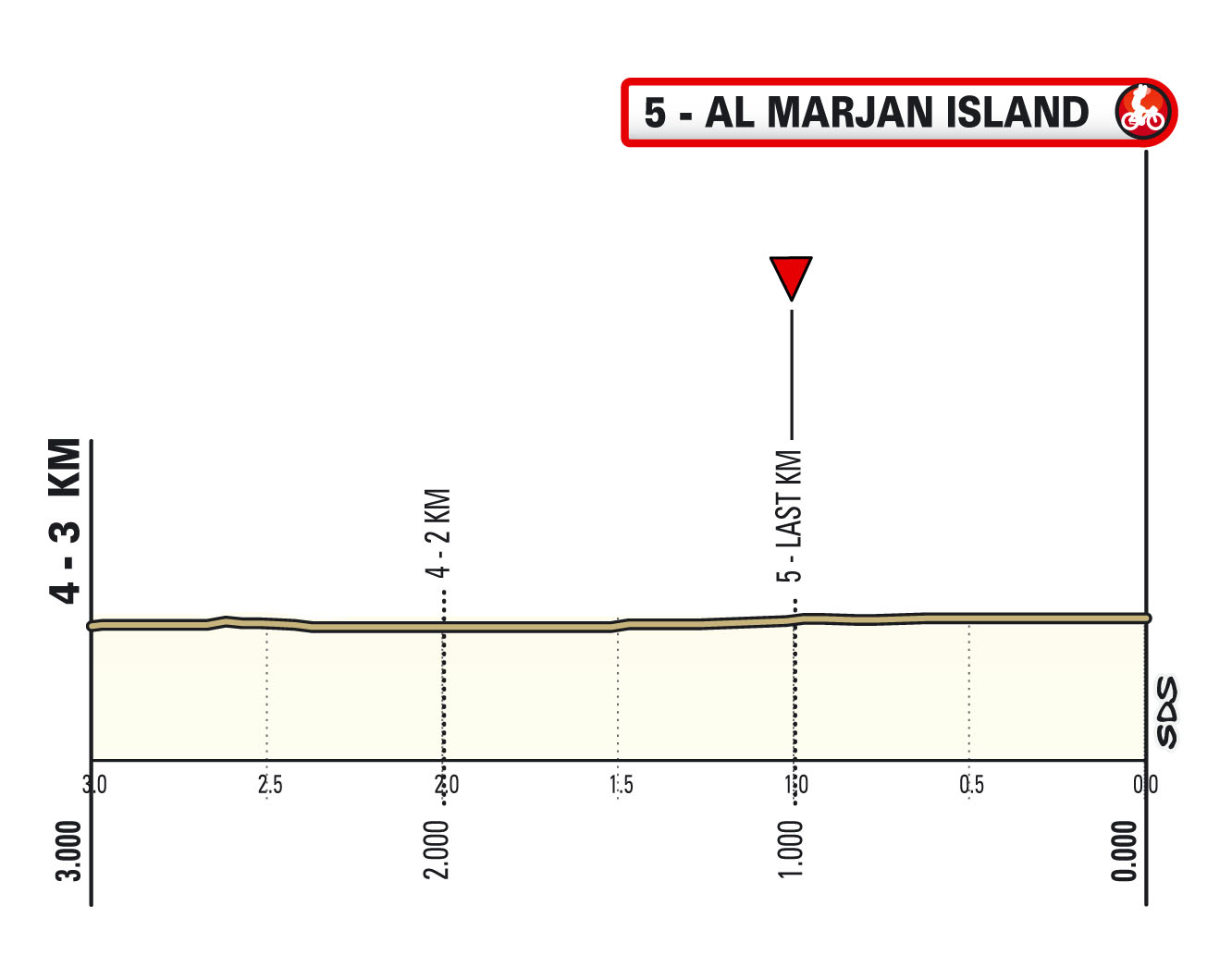 The final kilometers
A sprint finish on a wide, slightly bending boulevard. Arrival on asphalt. 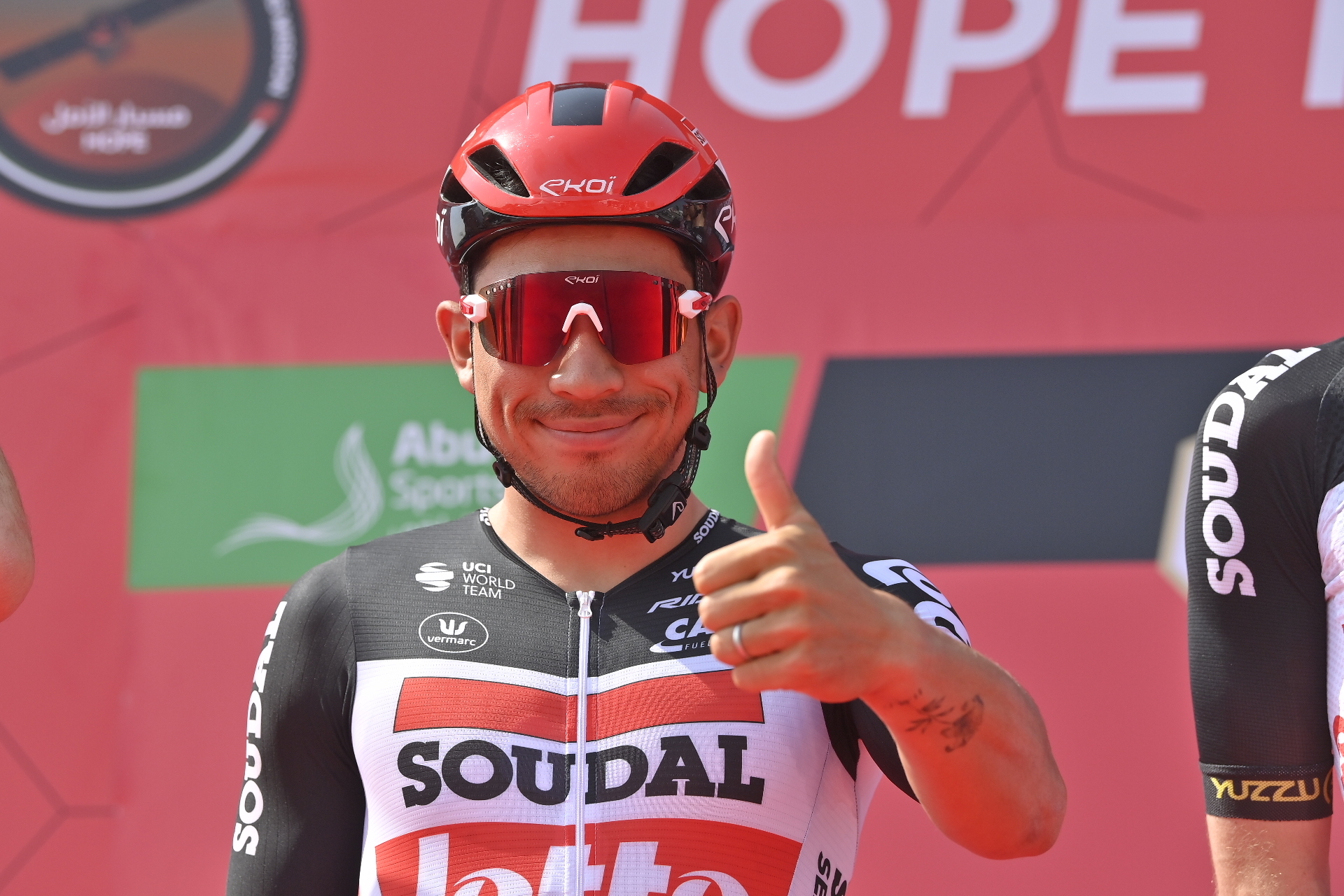 AL MARJAN ISLAND – 204/0 KM TO FINISH LINE
Al Marjan Island is a series of four man-made, coral-shaped islands extending 4.5km into the turquoise waters of Ras Al Khaimah, the UAE’s northernmost emirate. It was named Al Marjan Island because the complex resembles coral (marjan in Arabic) when seen from above. With various world-class resorts and restaurants located on the island, there is plenty of entertainment and relaxation activities for residents and visitors to enjoy.

SHEIKH KHALIFA SPECIALTY HOSPITAL – 195 KM TO FINISH LINE
Under the visionary leadership of His Highness Sheikh Khalifa Bin Zayed Al Nahyan, President of the United Arab Emirates, Sheikh Khalifa Specialty Hospital (SKSH) was built in the middle of five emirates – Sharjah, Ajman, Umm Al Quwain, Ras Al Khaimah and Fujairah – to cover medical services for these Emirates. SKSH is the leading medical facility in the Emirate and a referral centre for the Northern Emirates.

AL SAWAN CAMEL RACETRACK – 95 KM TO FINISH LINE
Camel races are a traditional heritage activity in Ras Al Khaimah. Mainly a winter pastime, the camel races take place on the weekends at the camel racetrack, surrounded by dunes and sheltered by the thickets of Ghaf trees in Digdaga and Hamraniya. On weekdays, the racetrack is usually busy with camel trainers and colourfully clad camels trotting up and down the track, building up their stamina for the weekend races. The camel races are held early Friday mornings from 6:30 to 9:30am from October through the winter season.

UMM AL QUWAIN – 150 KM TO FINISH LINE
Umm Al Quwain is the second smallest and the least populated emirate in the UAE. It covers an area of approximately 720 sq. km, which is equivalent to 1 per cent of the UAE’s area. The city of Umm Al Quwain is built on a narrow peninsula called Khor Al Bidiyah. The emirate has rich coastal mangroves on the coast of the Arabian Gulf and many islands that lie to the east of the mainland. Umm Al Quwain provides facilities for numerous recreational activities; from sailing to skydiving. Traditional activities such as dhow building and sports such as falconry and camel racing are also popular in the emirate.

DREAMLAND AQUA PARK – 160 KM TO FINISH LINE
Located on the scenic coastline of Umm Al Quwain, Dreamland Aqua Park is one of the major tourist attractions and is the largest water park in the UAE. Covering about 250,000 square meters. The park features high-salinity pool, raft rides, wave pool, swimming pool, lazy river, several water slides, spa-like pool with a bar for relaxing. Inaugurated on 12th June 1997, Dreamland Aqua Park was the vision of His Excellency Sheikh Abdullah Bin Rashid Al Mualla, Deputy ruler of His Highness Sheikh Rashid Bin Ahmed Al Mualla, member of the UAE Supreme Council and ruler of Umm Al Quwain Emirate, to create the first and largest water park in the region with a main concern – Fun is a right for everyone.

AL SINNIYAH ISLAND – 160 KM TO FINISH LINE
Al Sinniyah Island is the biggest island of several that lie east to the mainland of Umm Al Quwain. It is home to Arabian gazelles, falcons and turtles and features dense mangroves with sandy beaches. The island is especially meant for birdwatchers and nature enthusiasts since it hosts a wide variety of flora and fauna like the rare Socotra cormorants, flamingos and seagulls.

UAQ NATIONAL MUSEUM – 150 KM TO FINISH LINE
The UAQ National Museum is a renovated ancient fort that was used to guard the entrance to the old town. The museum houses several artefacts found at nearby archaeological sites. Another excavated site, Al-Dur, was a coastal city with nearly 200 BCE until the third century CE. The site also contains several interesting artefacts that are housed in the UAQ National Museum.

SUWAIDI PEARLS FARM – 40 KM TO FINISH LINE
Taking a fascinating trip to the yesteryears, to a time when pearling was once the pillar of the country’s economy, is Abdullah Al Suwaidi, who set up the region’s first cultured pearl farm in 2005 on the very waters that had produced the finest Arabian pearls coveted by royals, nobles and celebrities in distant lands. The pearl farm is located on a sliver alongside the sea and the mountains that Al Rams nestles. Visitors learn about the history and techniques of pearl farming and try opening an oyster.

JULPHAR TOWERS – 32 KM TO FINISH LINE
Julphar Towers provides an ultramodern lifestyle of luxury, convenience
and much more. They consist of one office tower and one residential tower complemented by extensive facilities. Nature lovers can enjoy strolls along the beach, a visit to the mangroves or creek, which are just minutes away.

RAS AL KHAIMAH MANGROVES – 35 KM TO FINISH LINE
Mangroves and salt flats form a large part of the coastal and inland landscape of Ras Al Khaimah. The mangroves, which are home to a variety of wildlife, including flamingos, extend right into the city bringing a rich sense of nature into the urban environment. Visitors can explore the mangroves by taking kayak excursions and literally lose themselves in the natural beauty.

DHAYAH FORT – 60 KM TO FINISH LINE
With a backdrop of steep mountains, the bay of Dhayah has always been a very fertile area and has been settled in at least since the third millennium BC. A conical shaped hill at the edge of the palm gardens and at the foot of the mountains, served as a natural defence post for the oasis. People have used this hill since prehistoric times for settlement and fortification alike. Today, it is crowned by a fortress, built during the 19th century on the foundations of much older structures. It is the only hilltop fort still existing in the UAE and offers a fantastic view of the lush palm gardens, sea and dramatic mountain landscape.

RAS AL KHAIMAH NATIONAL MUSEUM – 60 KM TO FINISH LINE
Take yourself and your family on a journey through time… Visit the National Museum of Ras Al Khaimah and come face-to-face with famous and fascinating historical pieces through a unique collection of archaeological and ethnological artefacts. Items of particular interest are a variety of documents, manuscripts and treaties between the rulers of Ras Al Khaimah and Great Britain. There are also exhibits of traditional weapons belonging to the ruling family and archaeological displays about the earliest settlers in the area up to the late Islamic period. retail, dining, entertainment, hospitality, grooming and wellness options. City Walk offers visitors a unique sense of community, it is designed to evolve as a city within a city, offering a multitude of residences, retail and leisure choices harmoniously in one location. With over 300 retail and dining outlets, City Walk is home to some of the most.