Jebel Jais, 25 February 2021 – Denmark’s Jonas Vingegaard (Jumbo-Visma) emerged as the stage winner atop Jebel Jais two years after his teammate Primož Roglič saw victory on the mountain. He overhauled Kazakhstan national champion Alexey Lutsenko (Astana – Premier Tech) in the last 500 metres to claim his biggest victory so far at the age of 24, stepping up for his team after making an impact as Roglič’s super domestique at La Vuelta last year. Tadej Pogačar (UAE Team Emirates) defended his overall lead with a defensive ride in the chasing peloton, ahead of two final stages that are likely to result in bunch sprint finishes. 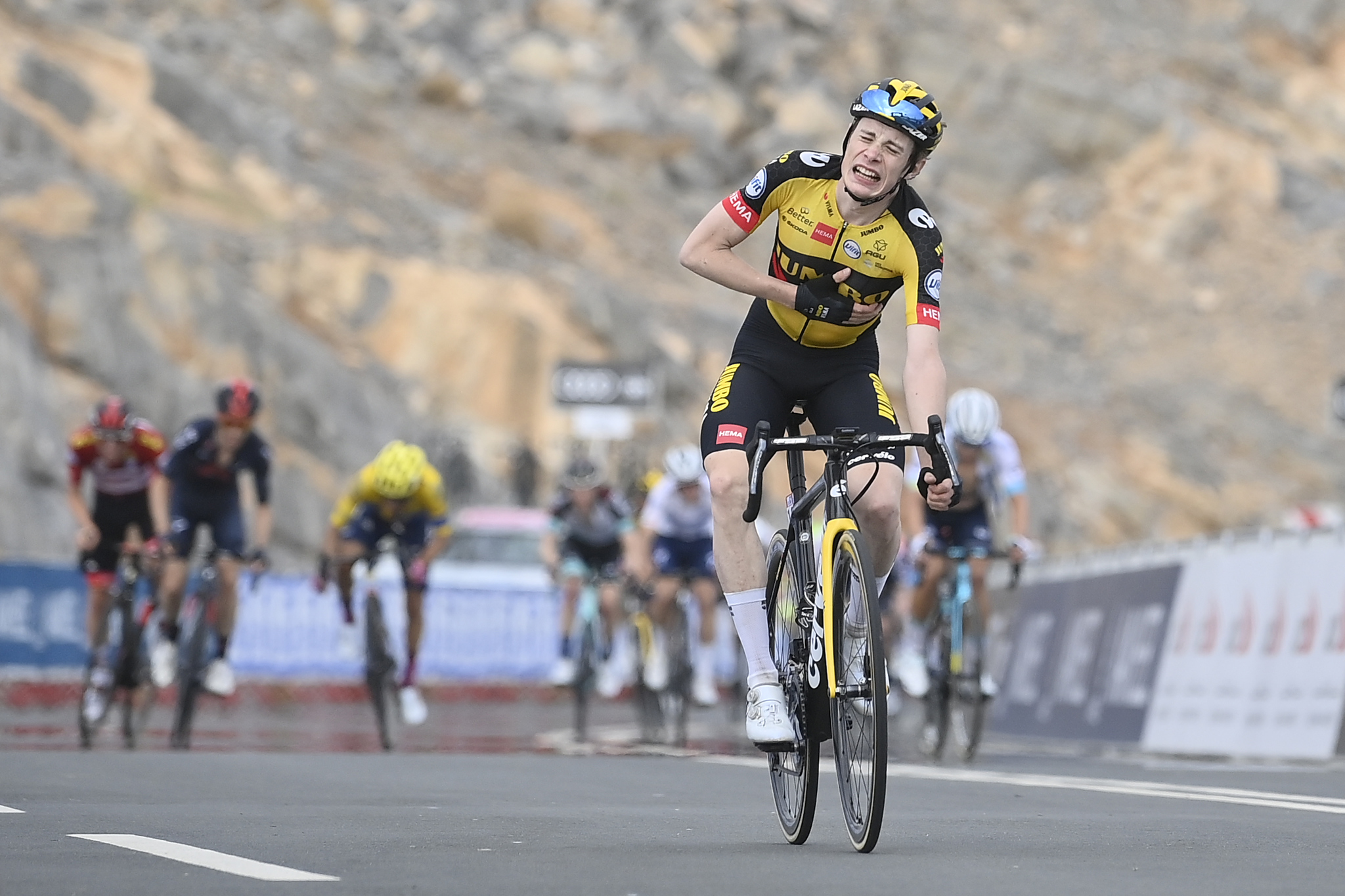 PRESS CONFERENCE
The stage winner Jonas Vingegaard said in the press conference: “It was a very emotional win for me. It’s been almost two years since my last victory. I came here to try and do well in the GC. Unfortunately, I happened to not be in the first group on Stage 1, so it was already gone and I suffered a bit on the first mountain stage as I found the the heat difficult to deal with. Our tactic this morning was for Sepp Kuss to attack within the last three kilometres while I was supposed to wait for the sprint. However, it became clear that it wasn’t going to finish with a sprint as the finale unfolded, and I saw an opportunity to go. I’m just really happy that I took the opportunity and now I have the stage victory.
I don’t know if this win will open up more opportunities for me. We have a very strong team. Quite often I’ll be racing to help Primož [Roglič] or Steven [Kruijswijk] or whoever is the leader at a race. Of course, I’ll get my chance as well, but I’m still young, so I’m not stressing about that. In the future, I want to be a GC contender myself and I’ll ride for GC occasionally, as I was supposed to do here, but for now, my main job is to help the top leaders we have. I’m scheduled to ride La Vuelta again this year. I enjoyed doing it for Primoz last year. He’s a really good captain and a very nice guy. I want to ride for him.” 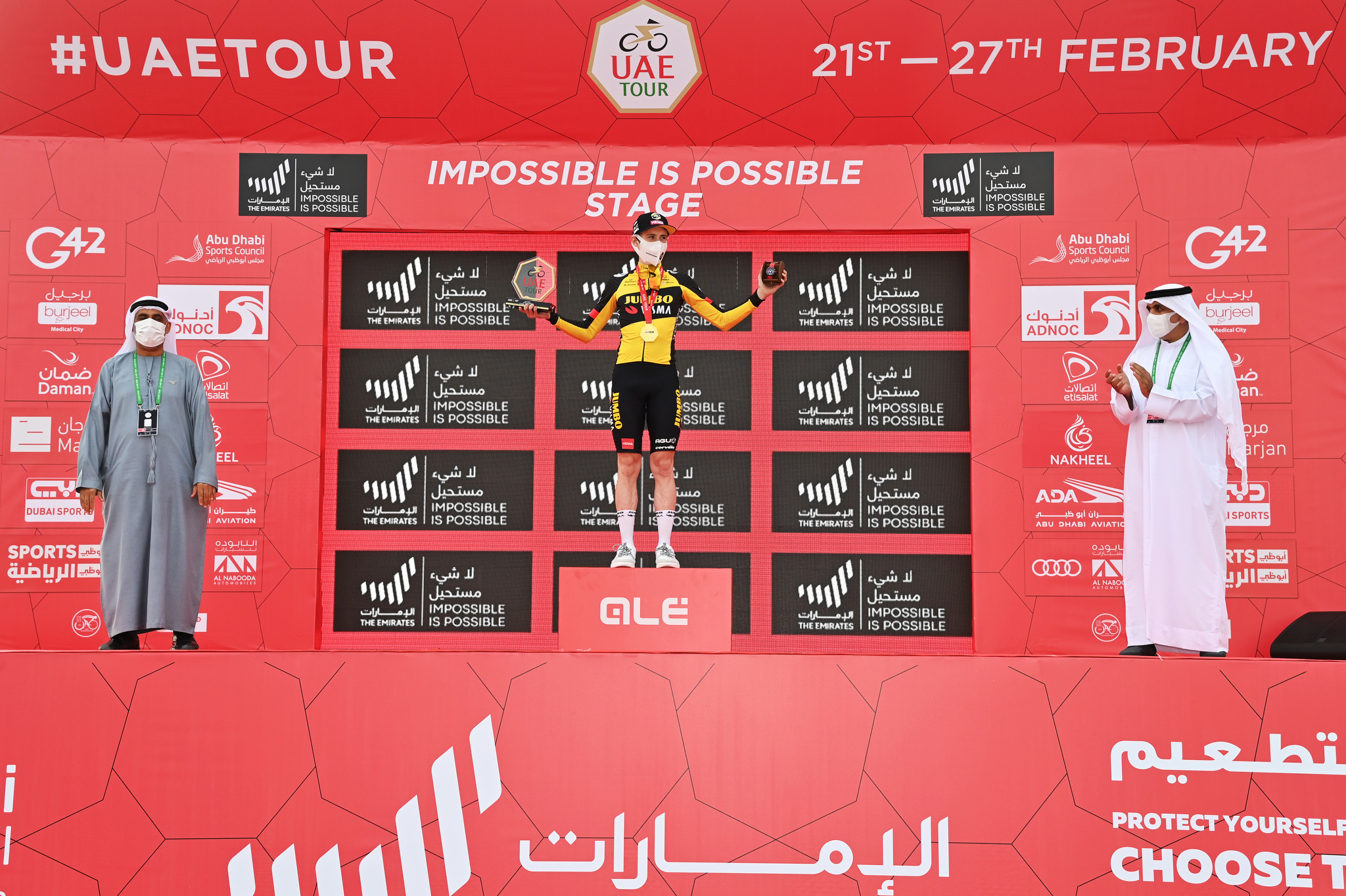 Speaking about the Impossible Is Possible Stage, Red Jersey Tadej Pogačar said: “For me, it was a hard day. The most important thing was to defend the jersey and I really managed that. The team did that too. It was ‘possible’ to win the stage, but now it’s ‘impossible’ to change the results, so I’m happy with the outcome. Getting second place today was good. In the next two days, we need to stay focused, because anything can happen. We need to be careful and hold the Red Jersey safely all the way to the finish line. We’re going to Dubai with some nice memories from previous years and I’m super happy to go there again. I have a feeling they are like family there. They really respect me.” 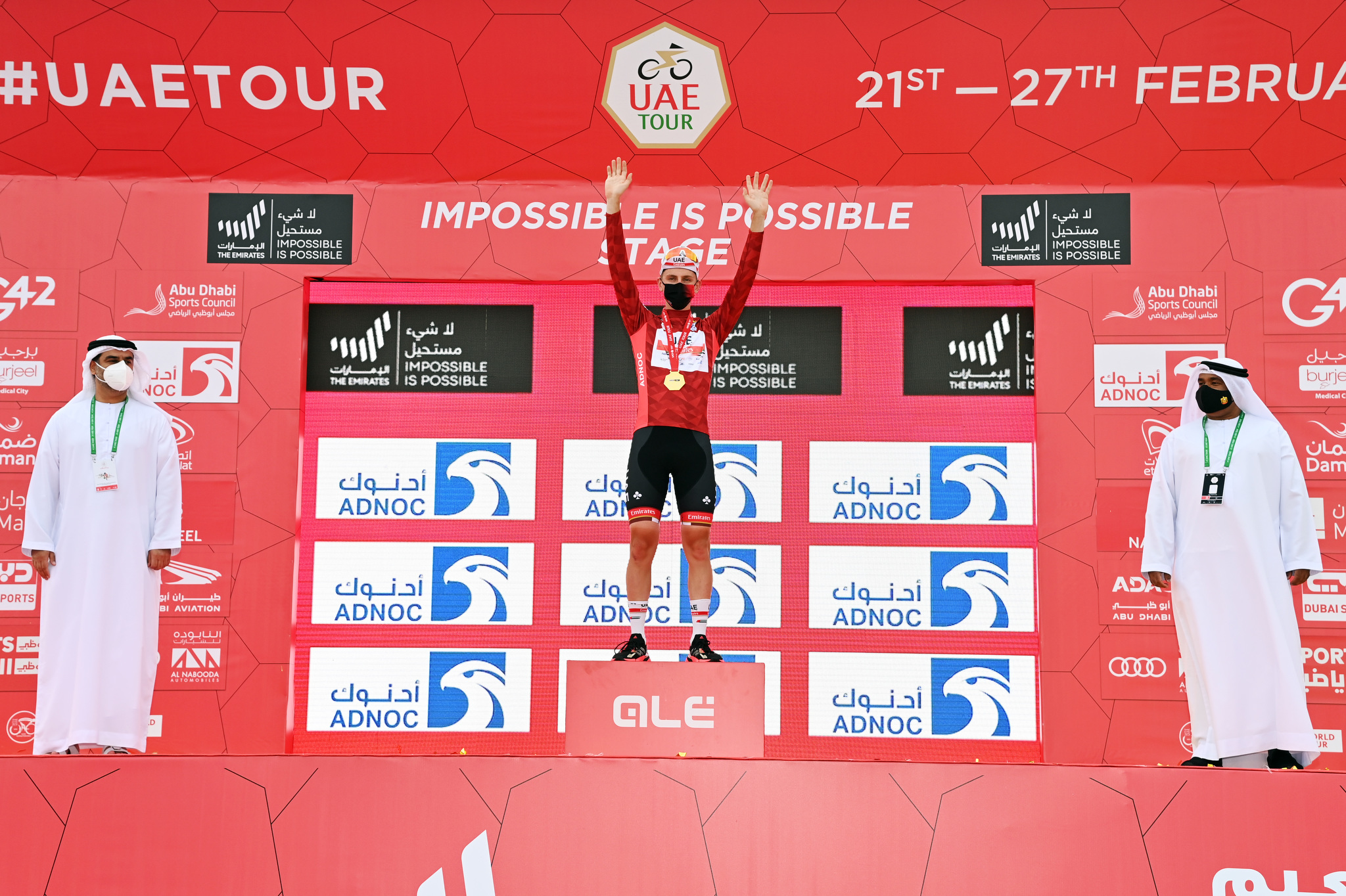 Thomas De Gendt, who was awarded the Black Jersey, commented: “In the beginning, I wasn’t particularly interested in getting into the breakaway. But after 40km, other riders started to play around again and, suddenly, there were more riders keen to go clear. I saw it was a strong group, so I felt it was good to be in it and I jumped. Lutsenko was the strongest rider there. I was hoping to have good legs to follow him but he was a bit too strong. I didn’t believe in the victory for myself, but now that I realize that Lutsenko was only brought back in the final kilometre, it feels like a bit of a lost chance. I knew that Tony Gallopin had 17 points and I had 10 points, so if I took the intermediate sprint, I’d have 18. It meant having a jersey. I always collect jerseys, so it’s nice to have one. Now that I have it, it becomes a goal to keep it and defend this lead as much as possible.” 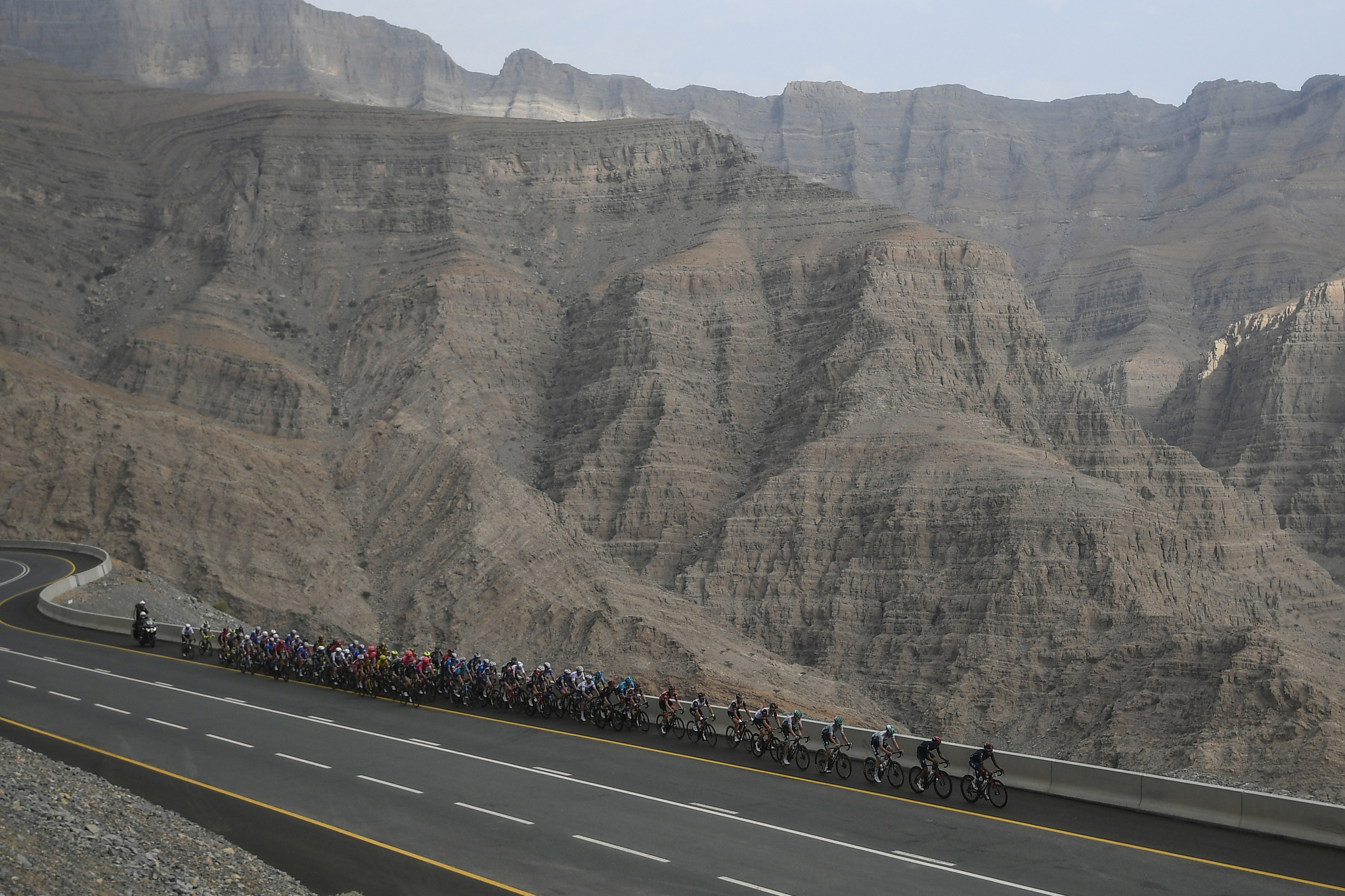 A stage that explores the city of Dubai. The race departs from Deira Island and follows the path of the Dubai Creek to cross the Deira area, passing by Meydan before joining Jumeirah Road. The route then heads in the direction of the desert, taking the Al Qudra cycle path before returning to the city via the Jumeirah Islands and reaching the Palm Jumeirah. The route features very wide and well-paved roads, with the possibility of sand, if windy. Two intermediate sprints at km 67.1 (Springs Village) and at km 103.3 (Al Qudra Cycletrack). 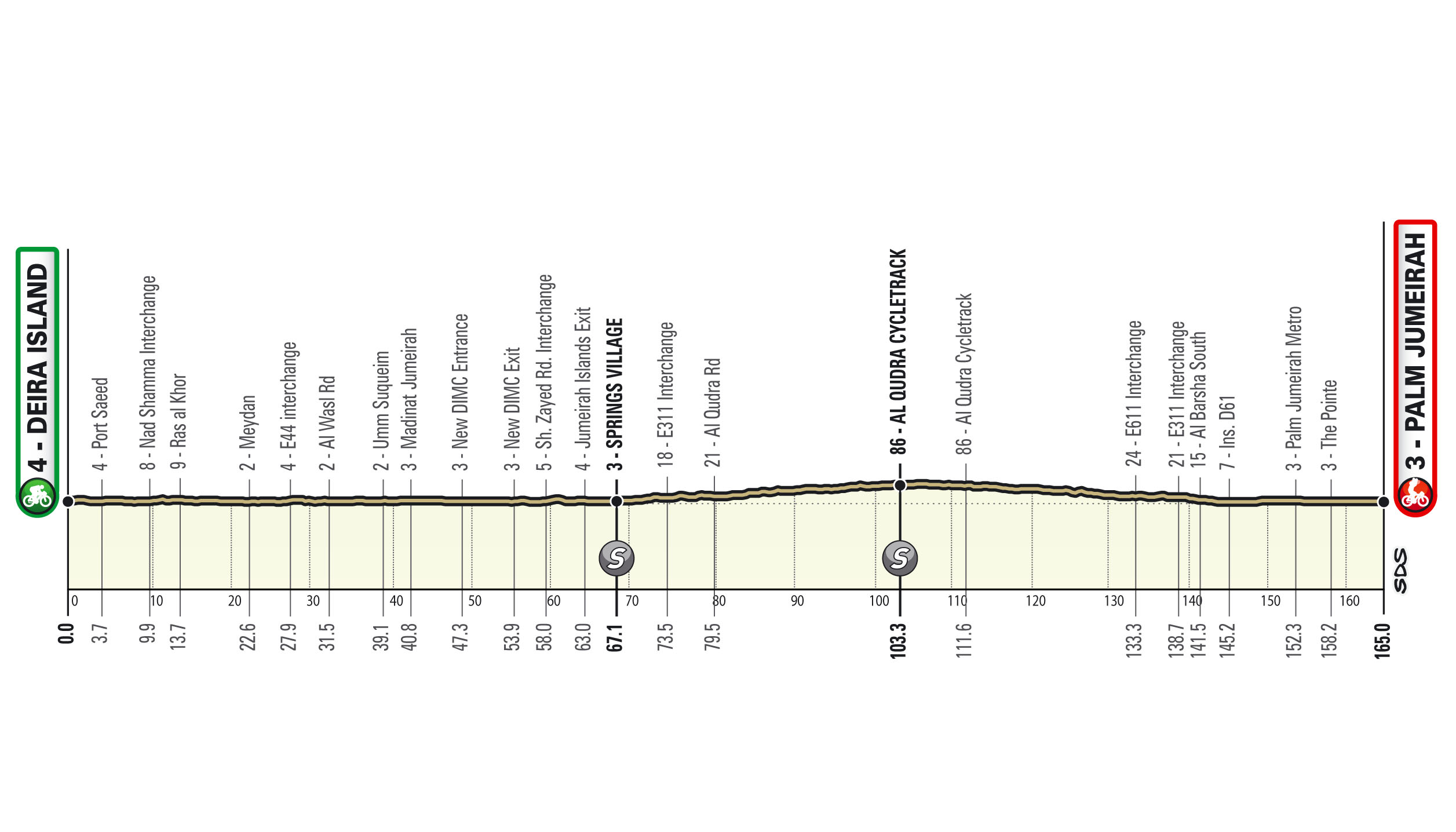 The final kilometers
The race enters the ‘Palm’ in its final stages, through an underwater tunnel. Of note is a descent and ascent where the road is marked by numerous raised rumble strips, highlighted in colour. At 3200m to go, the riders will negotiate a tight turn. The last 3km are mostly straight (though constantly on a slight curve), with some roundabouts present. The final 7m-wide straight is 800m in length (again, on a slight curve) on asphalt.