Palm Jumeirah, 26 February 2021 – Ireland’s Sam Bennett (Deceuninck-Quick Step) claimed his second bunch sprint victory of the race at Palm Jumeirah in Dubai, beating Elia Viviani (Cofidis) who had already won twice on the same finish line in the past, and Pascal Ackermann (Bora-Hansgrohe). On the eve of the final stage, Tadej Pogačar (UAE Team Emirates) comfortably retained the overall lead, despite crosswinds that generated some action in the peloton. 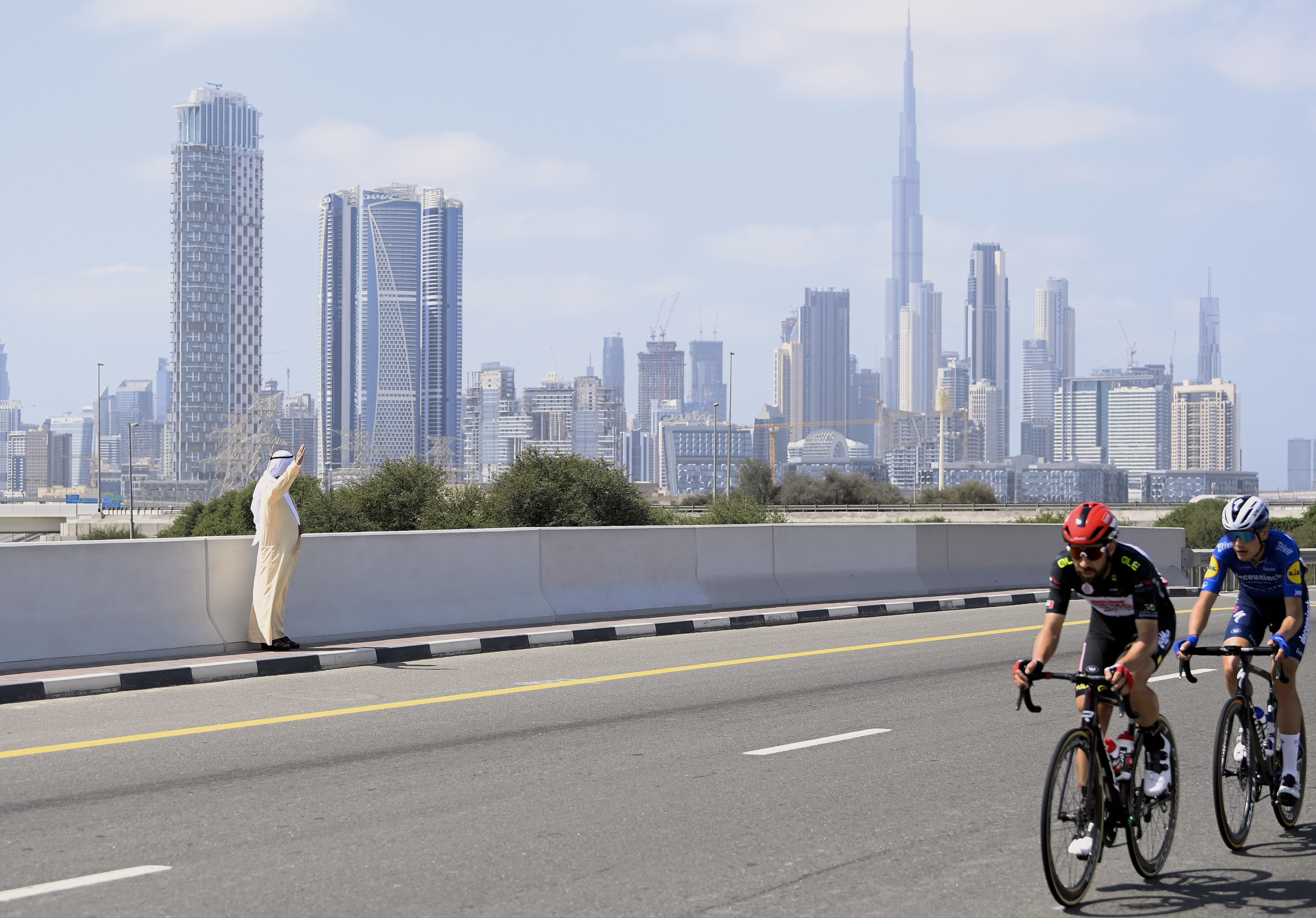 PRESS CONFERENCE
The stage winner Sam Bennett said in the press conference: “It’s down to my teammates and the very fast bike that I’ve won two bunch sprints out of two. The guys are very experienced and the more sprints we do, the more it’s becoming like second nature. We started the run-in really smooth. I’m delighted I could finish the job. In the finale, I saw Ackermann on the right then I knew I had a strong guy behind me. So I said to myself: ‘don’t leave it too late’. Then I realized it was the green jersey behind me. But I just focused on my own sprint. I came out at the right time. Tomorrow, a hat trick would mean a lot. I really wanted to start the season well. Now I have the confirmation that what I was doing at training was just right. I’m really proud to get two stages here. I don’t have any plans for [Irish celebration] St-Patrick’s Day. There’s not much we can do at the pubs at the moment. Looking ahead, Milan-Sanremo is always at the back of my mind. This time, I really want to be good, to get over the Poggio and sprint for victory. Before that, we’ll have Paris-Nice which is another race with a lot of history. I really want to perform there also.” 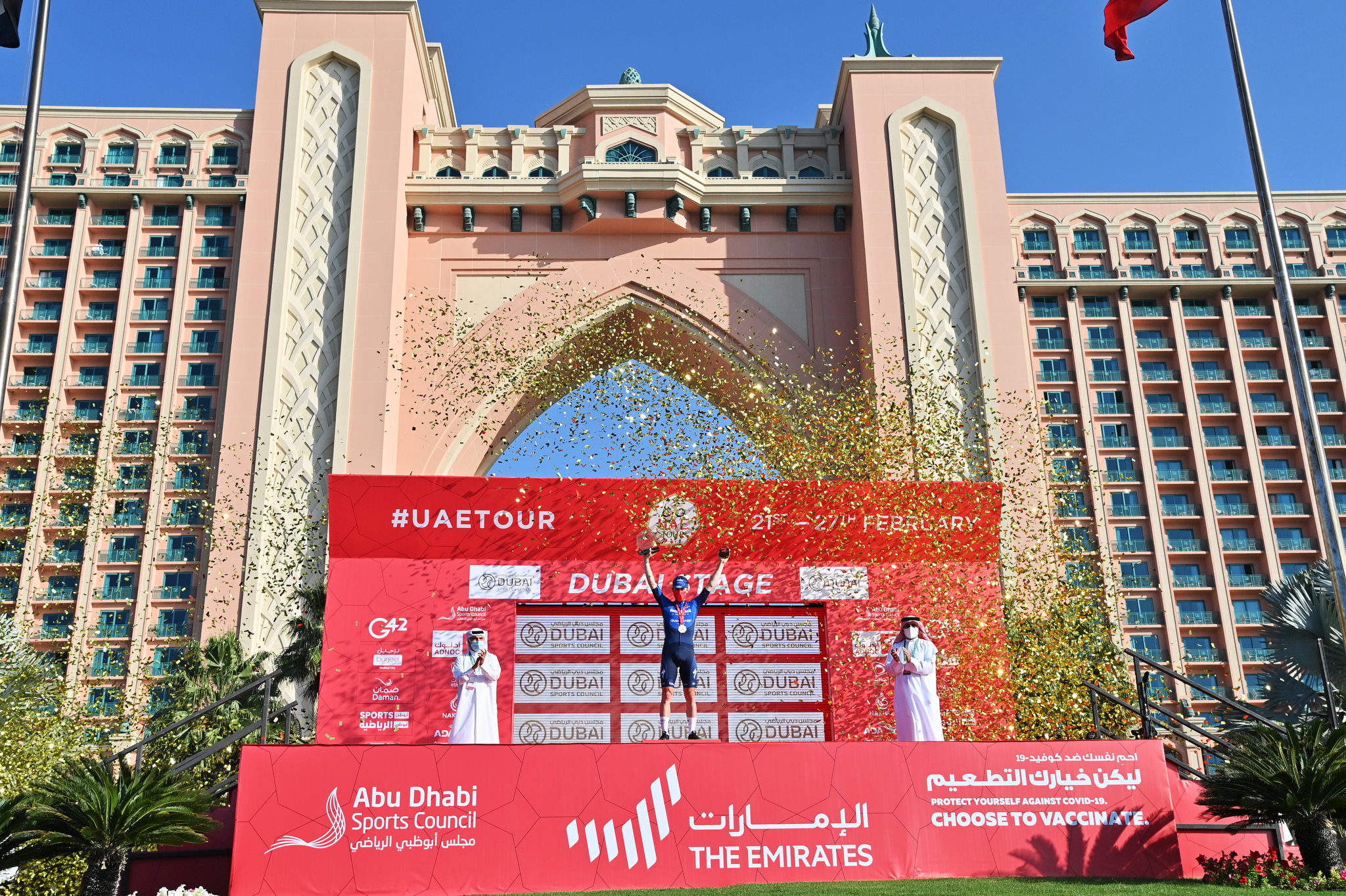 Red Jersey Tadej Pogačar said: “There were some hard moments with the crosswind, but our team did a good job keeping me safe. We were together throughout the stage. I’m happy this is over. We did the sprint [together] with Fernando Gaviria. I’m not that kind of guy that gives orders around, but we have a lot of riders who are still more experienced than me and I trust them completely. I don’t have to worry about anything, I just ride my bike. It’s a good team.” Speaking about Fernando Gaviria’s fifth place he added: “This is a sign that he’s coming back. Tomorrow he has one more chance and will feel more confident he can do a really good sprint again. 5th is quite good among really good sprinters, so I think he’s coming back.” 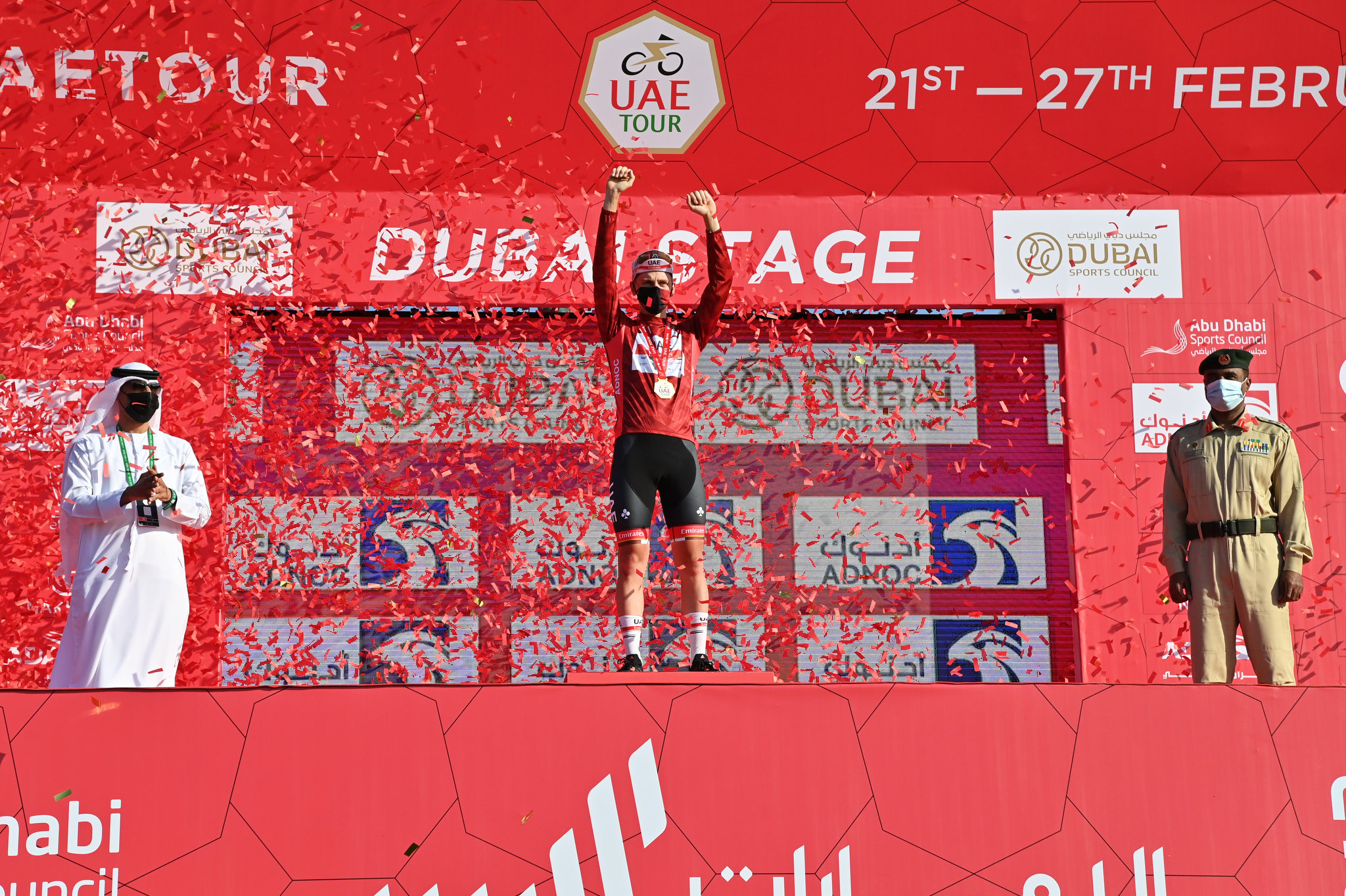 Tony Gallopin, today’s Black Jersey, commented: “We have to do something because we don’t have a sprinter here and no real hope for the GC at this stage. So the Black Jersey for the intermediate sprints was something I could target. Once I was in the breakaway, it was easy to take the points. I spoke to Thomas De Gendt yesterday, and he said ‘you can go, no problem’. He had to work for his sprinter Caleb Ewan instead of defending the lead in the intermediate sprints. It’s nice to have a distinctive jersey in this race.”

David Dekker, who came fourth, and was awarded the Green Jersey, said: “My positioning was good, but I had to come from a bit too far. But then in the end the sprint for me, personally, was not strong enough to beat Bennett from his position. I’ve learnt that especially in the last few kilometres you want to position yourself as best as possible, and then you watch what your rivals are doing with their teams. You try and follow them if you are not yourself in the best position yet. Today I took some points again, and now it’s definitely a goal for me tomorrow to be able to keep the Green Jersey. It would be a really great outcome to win a classification jersey in my first race for this team, Jumbo-Visma.”

TOMORROW’S STAGE
Stage 7: Yas Mall – Abu Dhabi Breakwater (147km), Yas Island Stage
A stage around the city of Abu Dhabi, Stage 7 departs from Yas Island (Yas Mall) and heads towards the city centre via the Al Raha area, passing close by the Grand Mosque. The route then leads to the Khalifa City area and travels north to Khalifa Port and Yas Marina, followed by Saadiyat Island. The race will visit Abu Dhabi’s Louvre and follow the Corniche waterfront before its arrival at the Abu Dhabi Breakwater for the last sprint finish of the tour. Two are the intermediate sprints, one at km 42.6 (Golf Gardens), and the other at km 130.7 (Louvre Abu Dhabi). 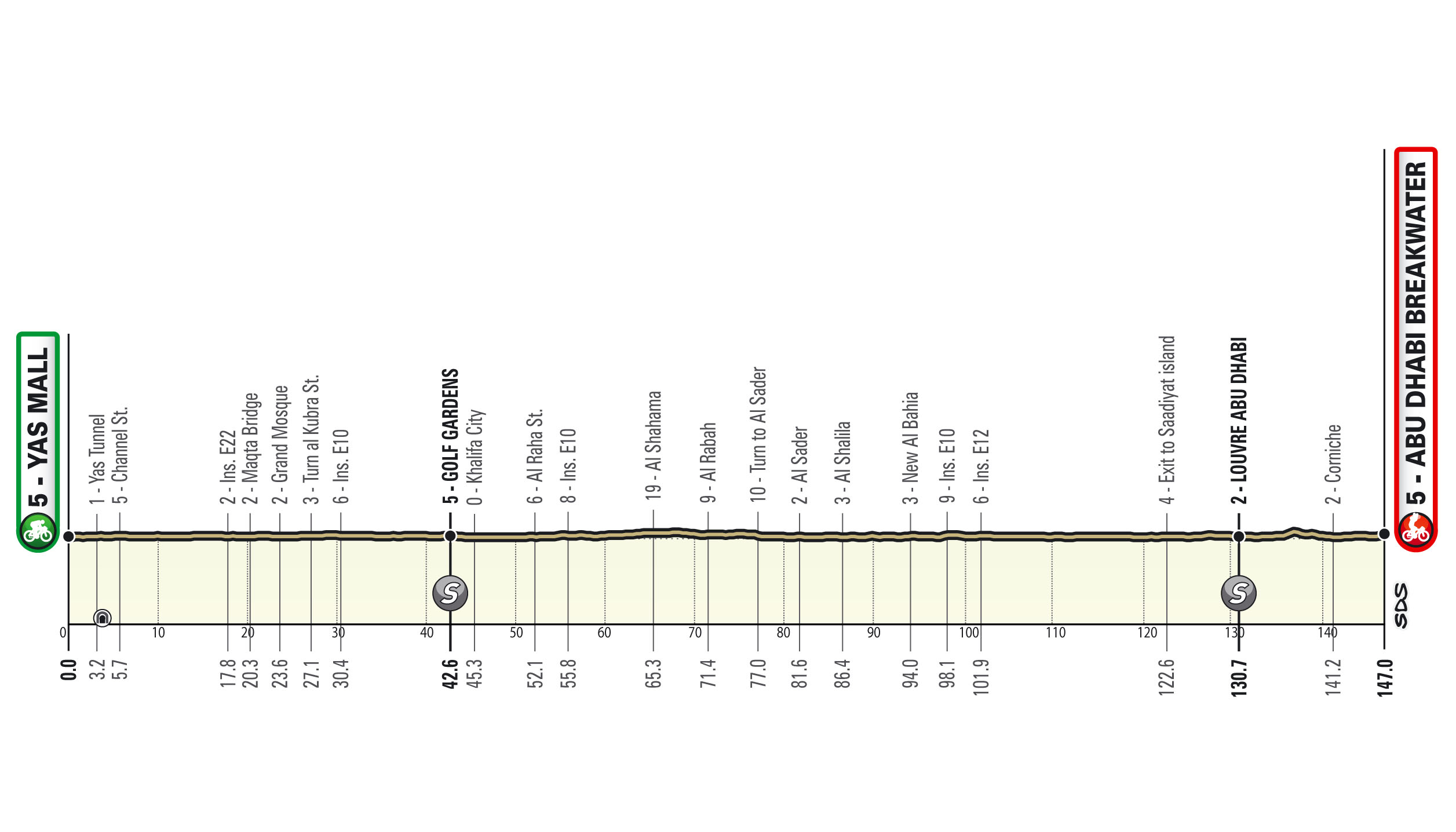 The final kilometers
The last 5km are entirely on wide roads with gentle curves that lead to the finish line straight on asphalt. 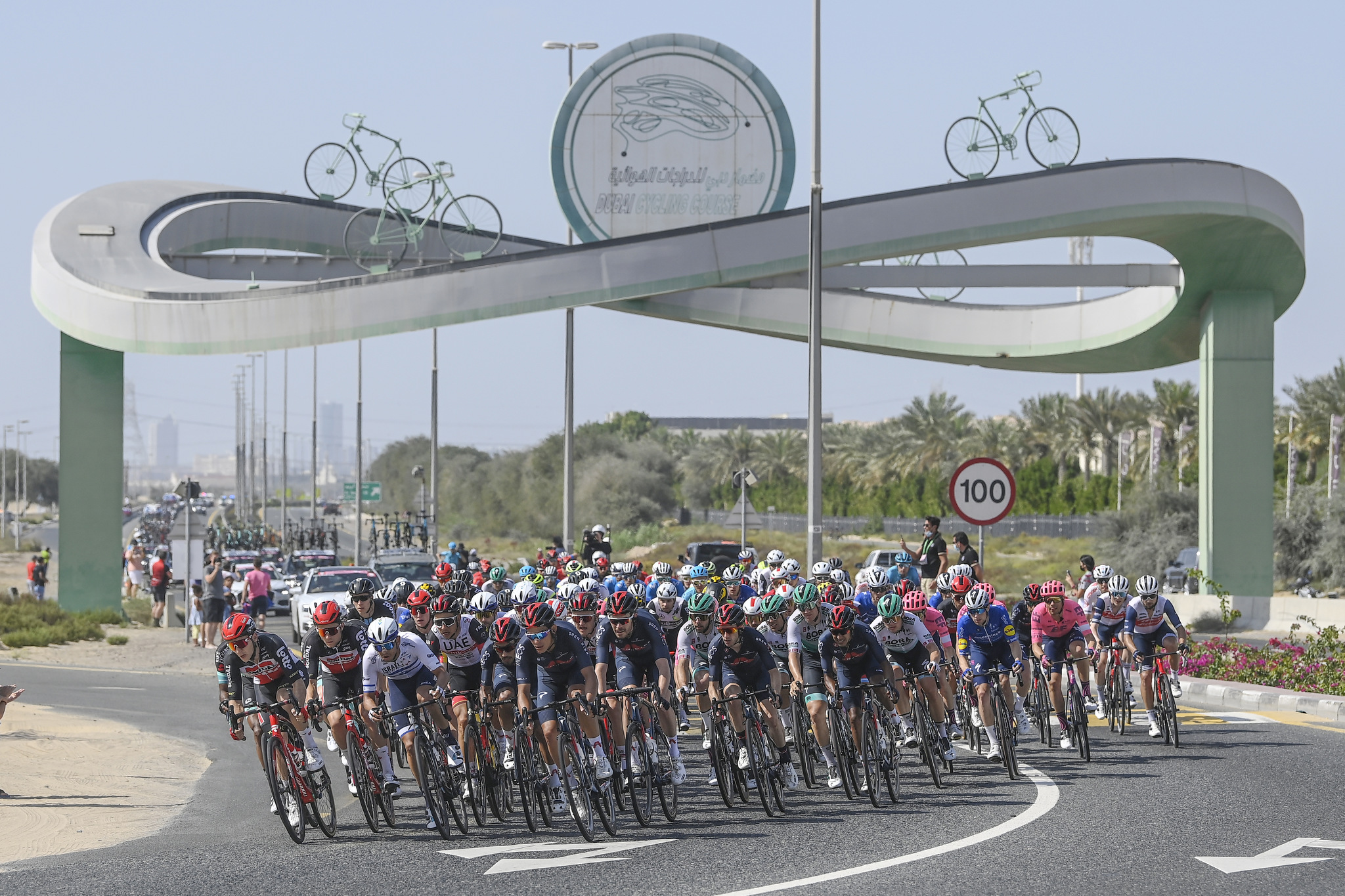