Dubai, 22 February 2020 – Eight representatives of the peloton at the start of the 2020 UAE Tour spoke to the media this afternoon. The top-class group of riders including UAE Tour runner-up and 2018 UCI Road World Champion, Alejandro Valverde; seven-time Grand Tour winner Chris Froome; the young Slovenian Tadej Pogačar; the winner of Stage 4 at the 2019 UAE Tour atop Hatta Dam, Caleb Ewan; 2nd overall at the 2017 Dubai Tour, Dylan Groenewegen; winner of the final stage of the 2019 UAE Tour, Sam Bennett; winner of 2019 Giro d’Italia Points Classification, Pascal Ackermann and Mark Cavendish: 48 Grand Tour stages and the General Classification at the 2015 Dubai Tour. The official Start List is now available.

Chris Froome
Bio: Froome, born in Nairobi, Kenya, 20 May 1985, is the most successful active rider in terms of Grand Tour victories (Vuelta a España 2011, 2017, Tour de France 2013, 2015, 2016, 2017, Giro d’Italia 2018) and the first cyclist to have won them all within one year since Bernard Hinault in 1983. He sustained a career-threatening crash at the Critérium du Dauphiné in June last year and makes his comeback to racing at the UAE Tour.
Quote: “I’m extremely happy to be here. I was hoping to do this race last year but I didn’t make it. After the crash last June, I’ve been away from racing for eight months. It feels good to be racing again. I’m really excited to be here. I hope that I’m at the right level. I’m certainly not gonna be winning this week! I’ve gone through really tough moments in the past eight months, but my goal was always to start this season relatively early and I’m super happy to be given the second chance to be back in the peloton.”

Alejandro Valverde
Bio: Valverde, born Las Lumbreras, Spain, 20 April 1980, is one of the most successful riders in the peloton with over 100 pro wins since his debut in 2002 with the Kelme – Costa Blanca team. His palmares includes four Liège-Bastogne-Liège (2006, 2008, 2015, 2017) victories, five at La Flèche Wallonne (2006, 2014-2017), one GC at the Vuelta a España. In 2018 El Bala (‘The Bullet’) won the UCI Road World Championships in Innsbruck-Tirol and the last edition of the Abu Dhabi Tour.
Quote: “I’ve come back feeling ambitious and I’m feeling good. I’m not in the shape I was in one year ago but it’s getting better and better. I want to enjoy this beautiful race where I have great memories, since it was my first victory in the rainbow jersey. The UAE Tour is a good race to start the season.”

Tadej Pogačar
Bio: Pogačar, born in Komenda, Slovenia, 21 September 1998, is the fourth rider to have made the final podium of a Grand Tour before turning 21 as he finished third overall at La Vuelta a España last year, having won three mountain stages. He already has three stage race victories GC under his belt: Volta ao Algarve (2019), Tour of California (2019) and Volta a la Comunitat Valenciana (2020), his latest result making him a hot favourite for the 2nd edition of the UAE Tour.
Quote: “It’s like a home race for our team. We are well prepared and expect good results in the sprints with Fernando [Gaviria]. I’ll try to do my best on Jabel Hafeet but I know it will be hard to repeat the success of my compatriot Primoz Roglic who won this race last year.” 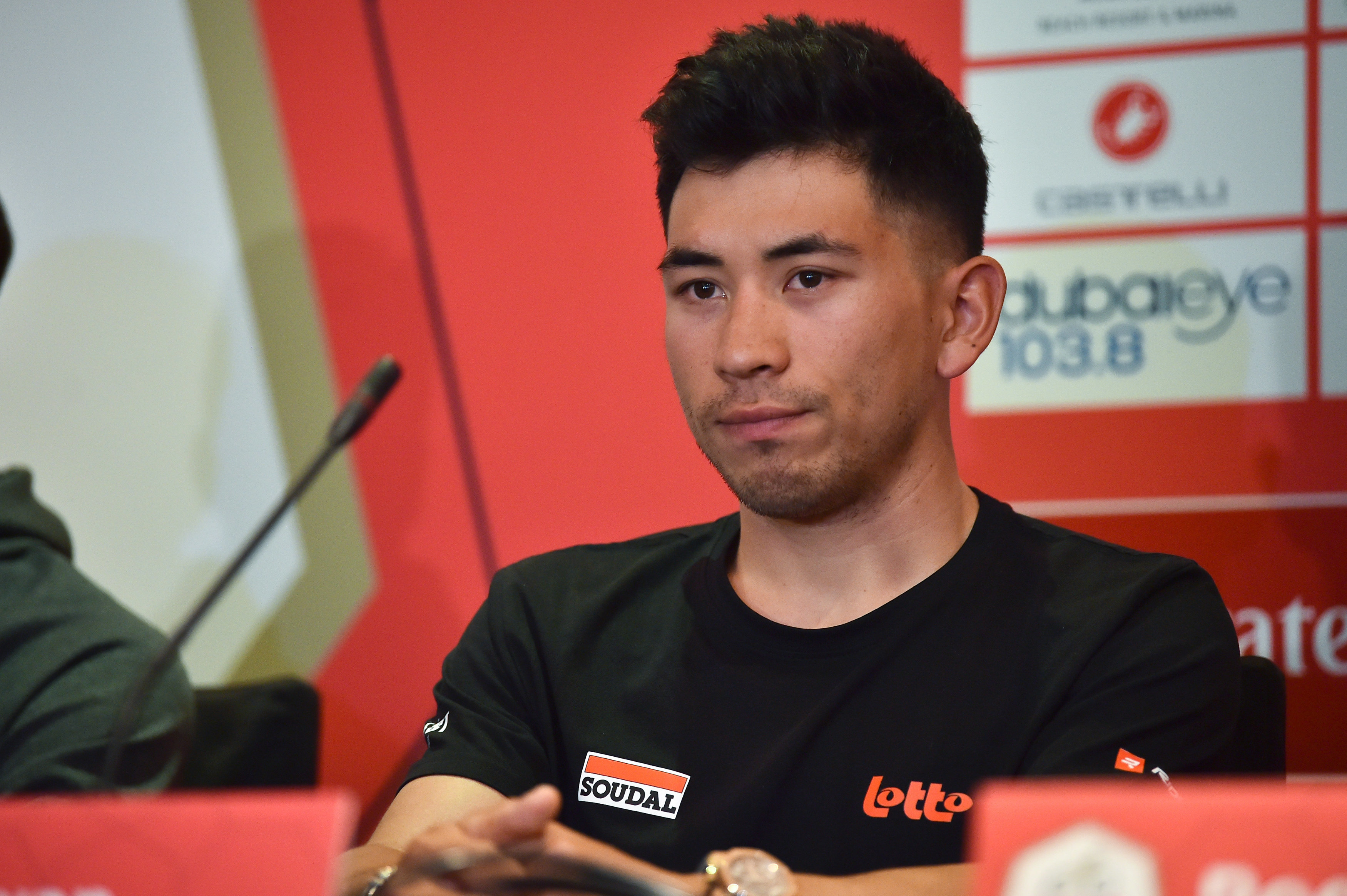 Caleb Ewan
Bio: Ewan, born in Sydney, Australia, 11 July 1994, became the youngest stage winner in every Grand Tour since Italy’s Nino Defilippis in 1956. He claimed three stage victories in his Tour de France debut last year, including the last one on the Champs-Elysées in Paris. The diminutive sprinter already compiled 45 pro wins at the age of 25. Among them are Stage 4 of the 2017 Abu Dhabi Tour on the Yas Marina circuit and Stage 4 to Hatta Dam in the 2019 UAE Tour. He started the 2020 on the right foot with two wins at the Santos Tour Down Under.
Quote: “The season started as well as I had hoped, but I’ve not been racing since the Santos Tour Down Under. In training I feel good. To win here as a sprinter, you need to be in top shape against all these guys!” 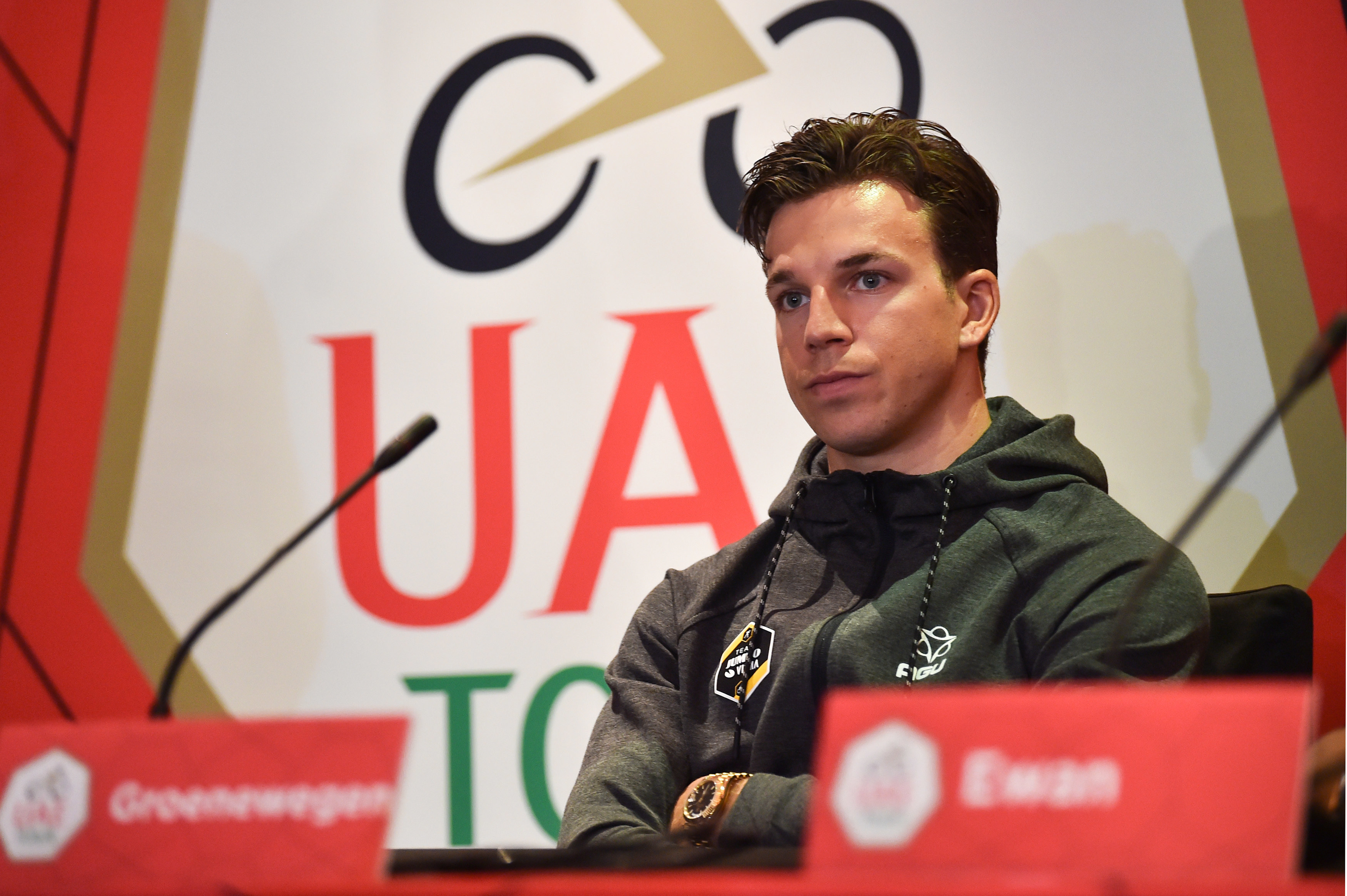 Dylan Groenewegen
Bio: Groenewegen, born in Amsterdam, The Netherlands, 21 June 1993, came second overall and best young rider of the 2017 Dubai Tour. Since then, four Tour de France stage victories in 2017, 2018 and 2019 have made him famous. Along with Caleb Ewan, Fernando Gaviria and Pascal Ackermann, he’s one of the four top sprinters of the generation born in 1993 and 1994 that has taken over from Mark Cavendish, Marcel Kittel and André Greipel who dominated the rest of the field in their speciality in recent year. The Dutchman who led the tally of individual victories (15) in the pro peloton last year already took two stage wins at the Volta a la Comunitat Valenciana this month.
Quote: “I think my shape is good – at least it was good at the Volta a Comunitat Valenciana. Here at the UAE Tour we have four chances for sprint finishes but there are a lot of good sprinters!” 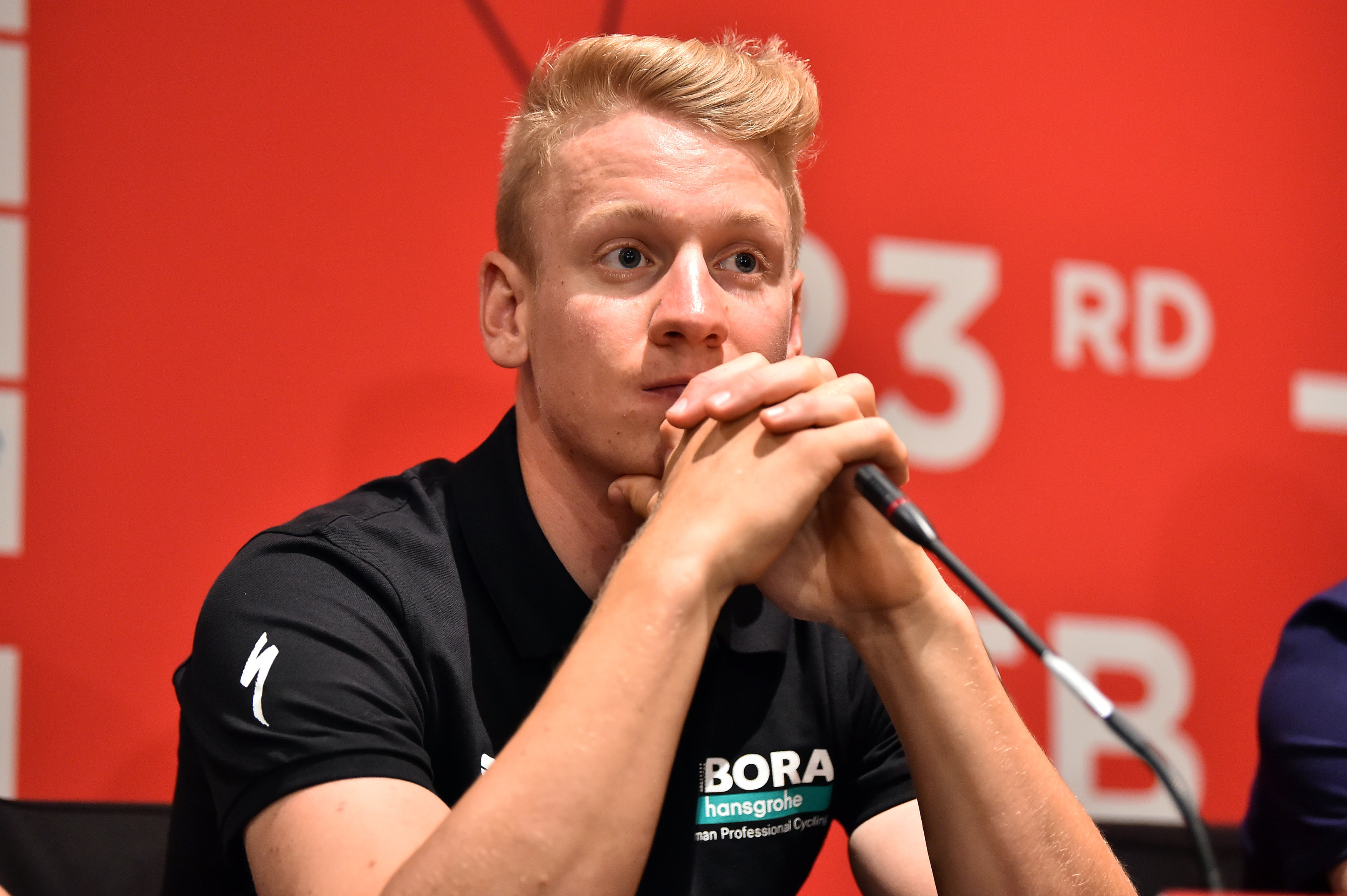 Pascal Ackermann
Bio: Ackermann, born in Kandel, Germany, 17 January 1994, won two stages and the points classification of the Giro d’Italia last year. He collected his 23 pro successes up to date in the past one and half years, the most recent one being the Classica de Almeria in Spain, earlier this month, and 12 of them having been won in UCI WorldTour races. He was also the 2018 German national champion. A former track rider with a pedigree in the omnium like Ewan, Cavendish and Gaviria, Ackermann is one of the most exciting top sprinters in the making.
Quote: “My performances at last year’s Giro were unexpected, and I hope to continue in the same good shape, and my first races this year have gone very well. Winning here would make it special with all the good sprinters in contention.” 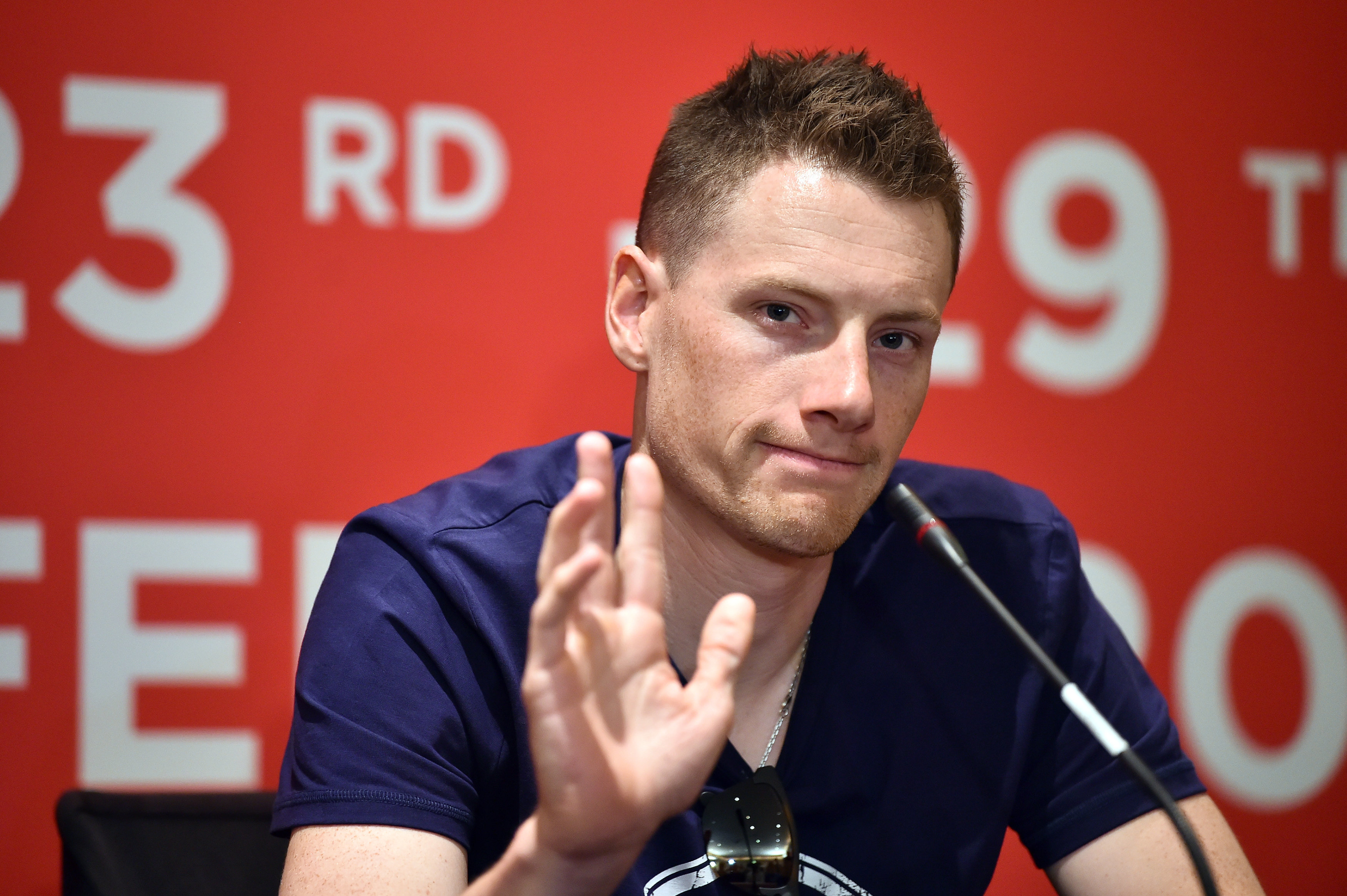 Sam Bennett
Bio: Bennett, born in Wervik, Belgium (where his father Michael was a professional football player), 16 October 1990, won five Grand Tour stages in the past two seasons (three in the 2018 Giro d’Italia and two in the 2019 Vuelta a España), making him one of the most in-form sprinters of the moment. The reigning Irish national champion makes a highly anticipated return to the UAE Tour where he won the last stage in a star-studded field of sprinters in Dubai last year after a successful start to the 2020 season in Australia with victories at the Santos Tour Down Under (Stage 1) and Race Torquay.
Quote: “The competition is very high here. There are more top sprinters at the UAE Tour than at the Tour de France in the middle of the season, so it’ll be interesting. I just hope to continue with the success we had in the Santos Tour Down Under.” 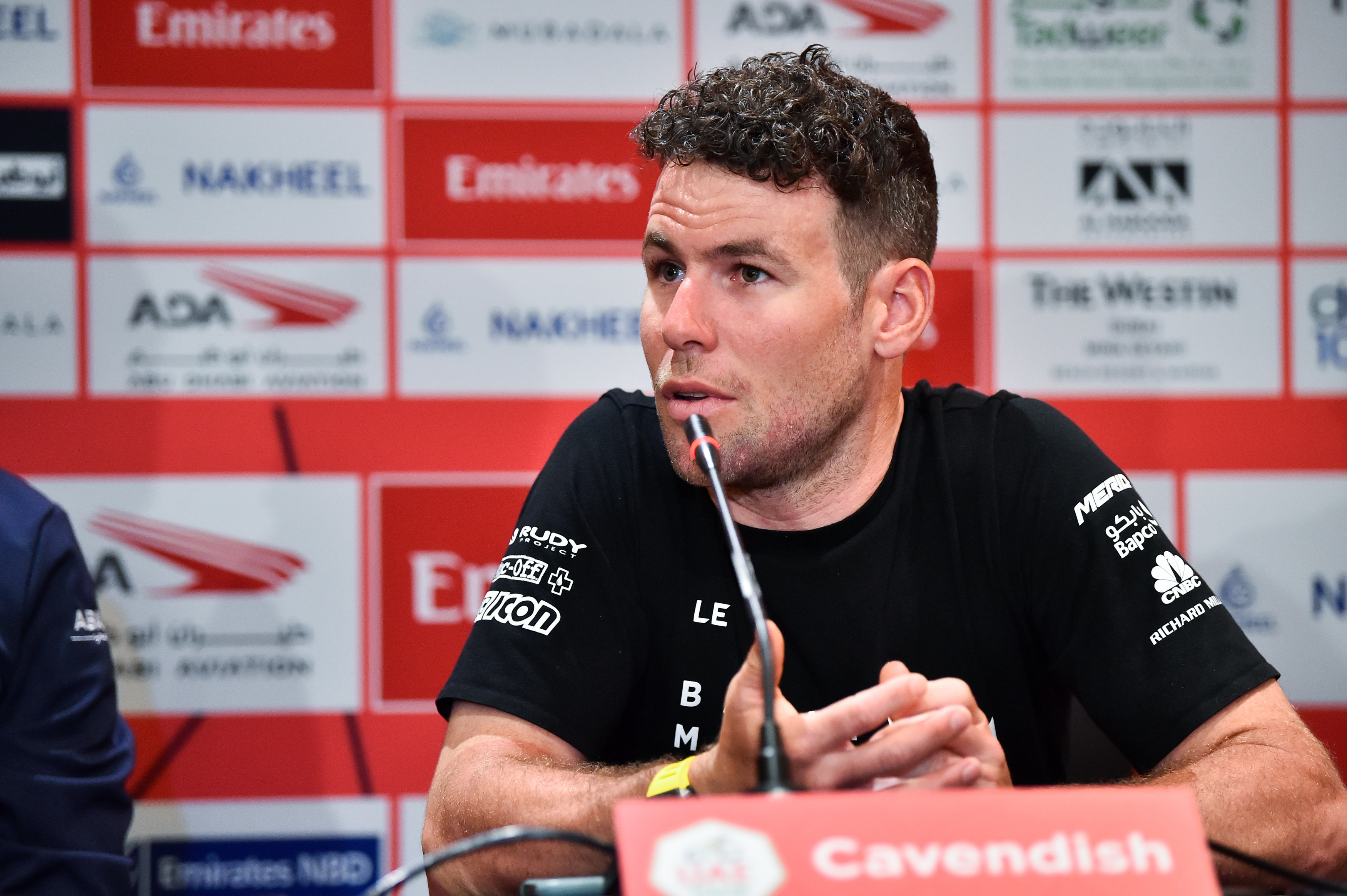 Mark Cavendish
Bio: Born on 21 May 1985 in Douglas, Isle of Man (British Isles), Cavendish has won 15 stages at the Giro d’Italia, a mighty 30 at the Tour de France, and three at the Vuelta a España. In 2011, in Copenhagen, Denmark, he became UCI Road World Champion, and boasts one-day-race successes such as Milano-Sanremo (2009) and the National Road Race Championships. “Cav” has won the overall victory at the 2015 Dubai Tour and three stages at the Abu Dhabi Tour.
Quote: “We went to the Tour of Saudi Arabia with high hopes. It was the first race for our sprinters’ team, we won GC and two stages, we were super happy with that. It’s nice to be back in shape. We have the UAE Tour to finish that block in the Middle East. We don’t have the same group here but the same high ambitions.”