Good Morning from Stage 1 of the UAE Tour

The ADNOC Stage features 176km of riding between Al Dhafra Castle and Al Mirfa. The post-stage press conference will be live-streamed on the UAE Tour’s YouTube channel.

Al Dhafra, 21 February 2021 – Good morning from Stage 1, the ADNOC Stage, of the third edition of the UAE Tour (21-27 February 2021), the one and only WorldTour race in the Middle East. The opening stage features 176km of riding on a flat route between Al Dhafra Castle and Al Mirfa and is expected to end with a bunch sprint that will assign the first Red Jersey of the race. 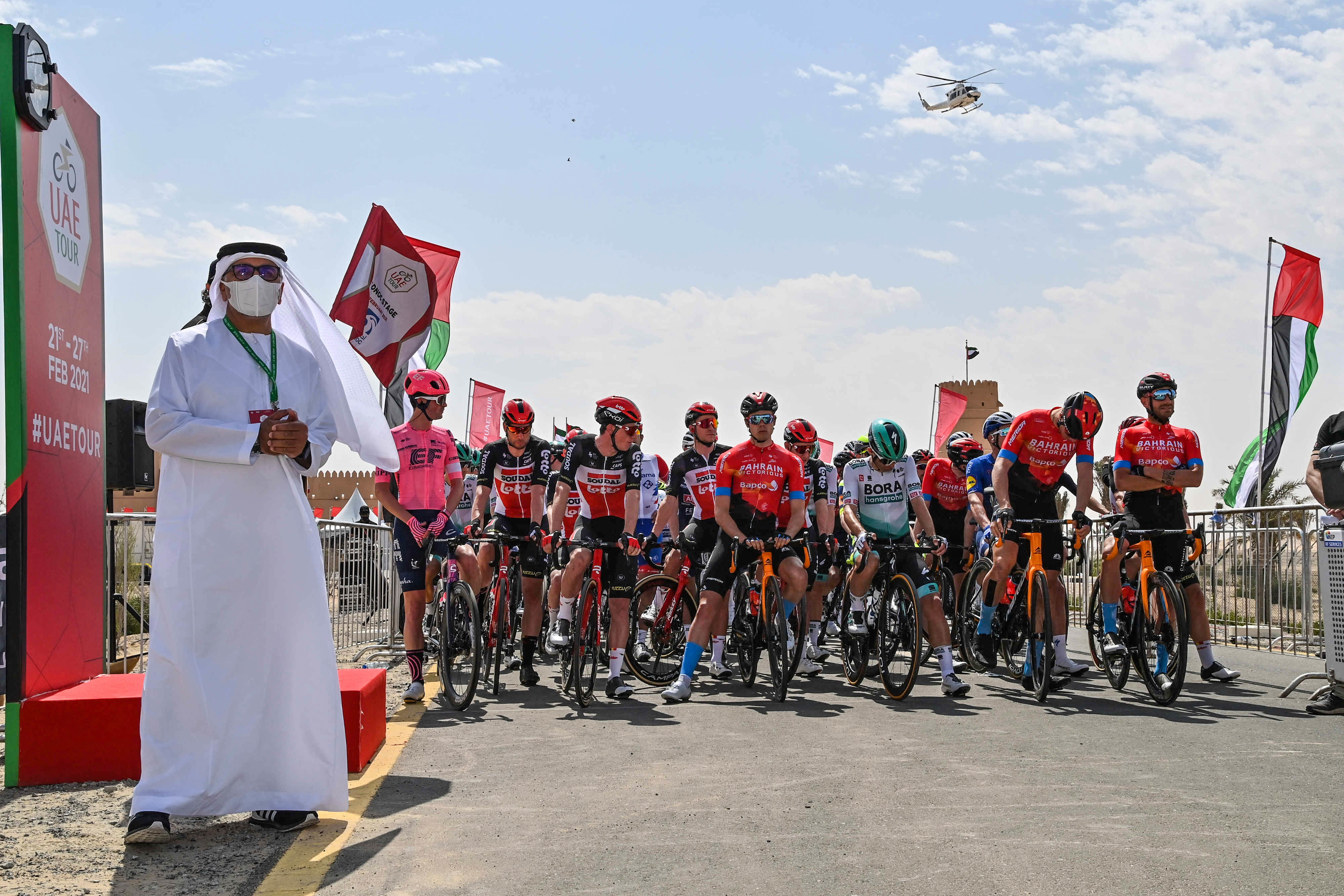 H.E. Aref Hamad Al Awani, General Secretary of Abu Dhabi Sports Council was present at the start of the 1st stage of the 2021 UAE Tour

Thanks to Velon’s rider data system, TV viewers and online users can see the riders’ wattage, speed, and cadence. The complete list of riders carrying Velon devices and onboard cameras on today’s stage is available here. 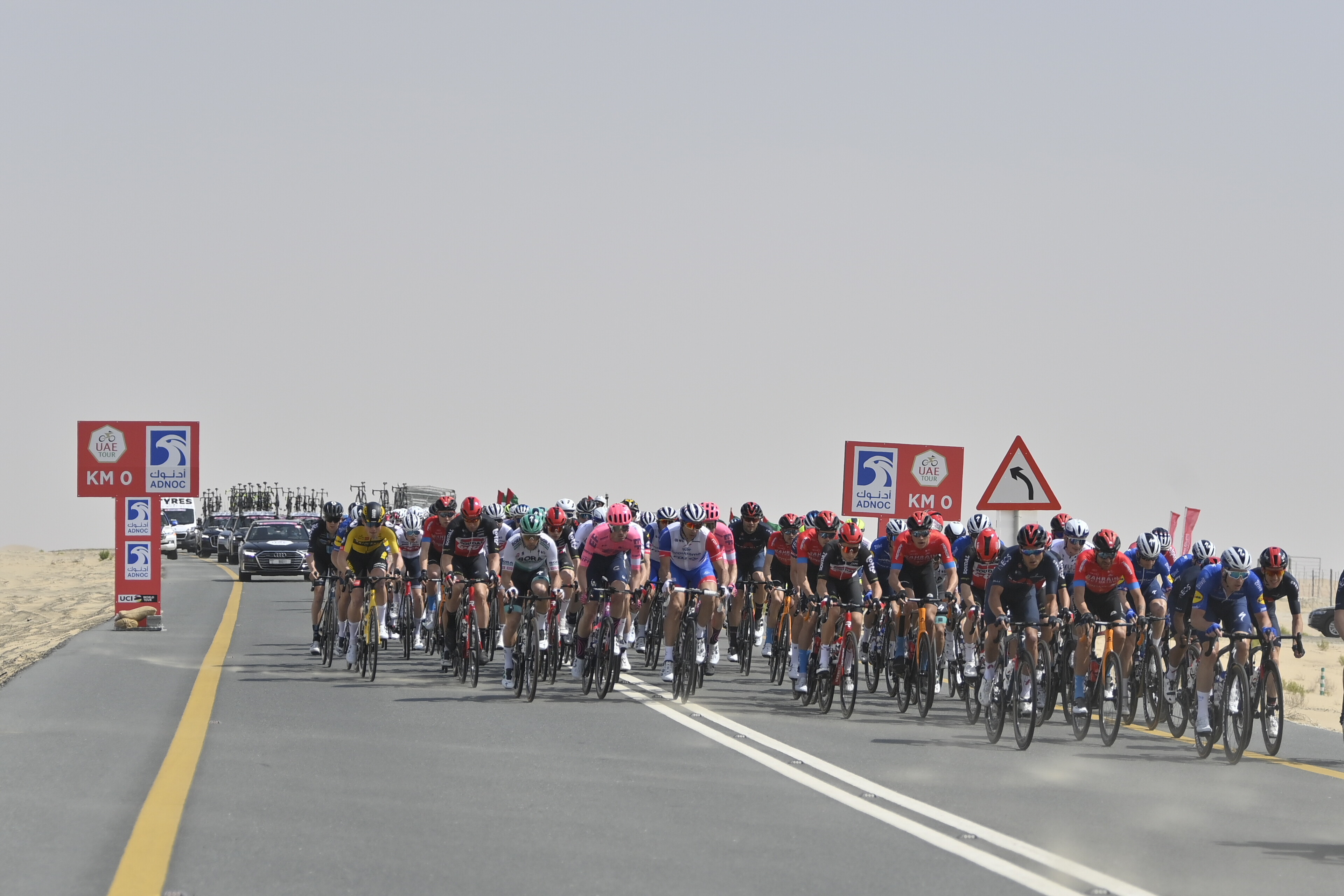 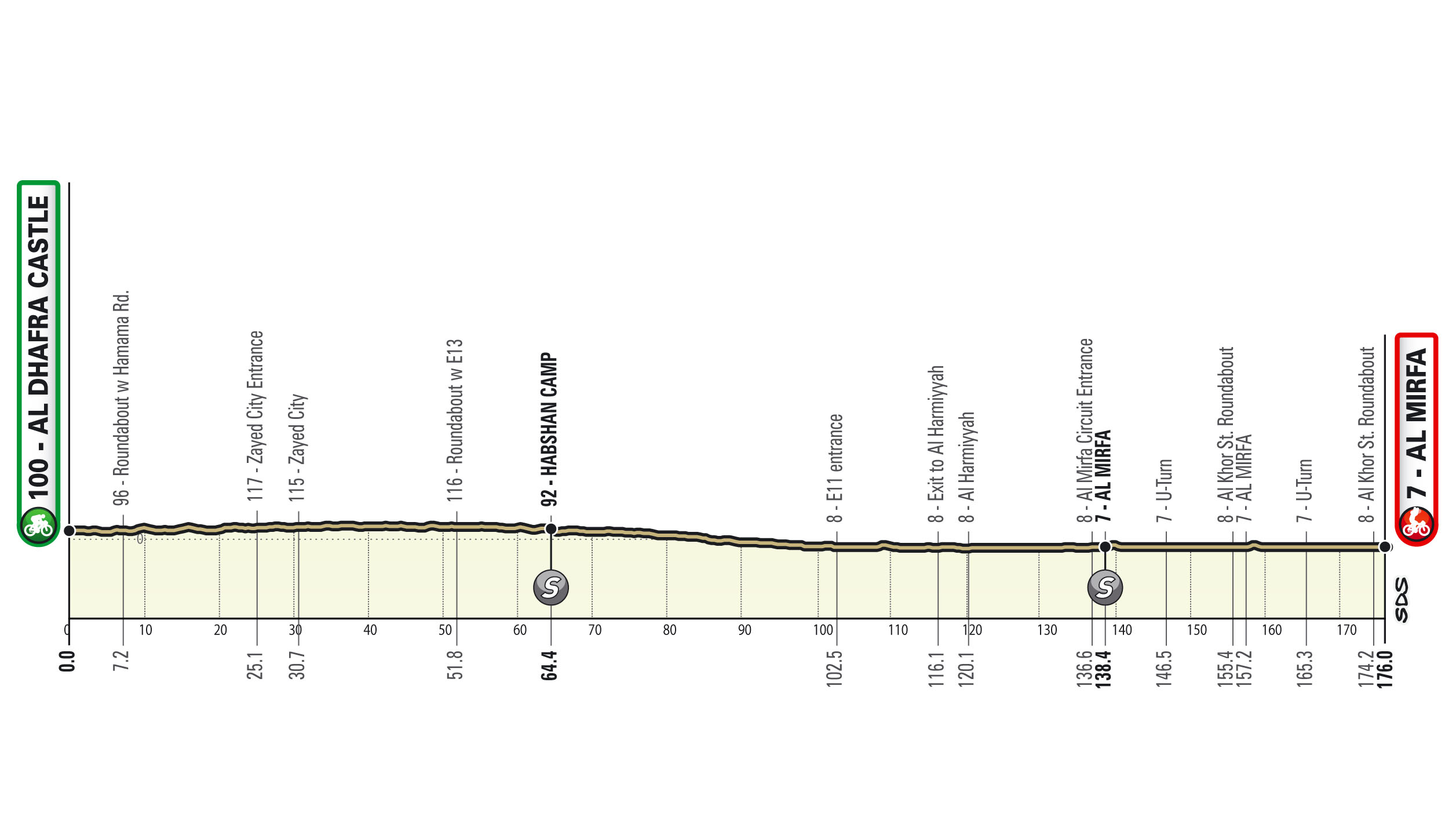 A desert stage, Stage 1 leaves from Al Dhafra Castle and crosses desert roads to reach Zayed City. The route then returns to the open sands before entering a final circuit on coastal roads in Al Mirfa. Two intermediate sprints feature; at 64.4km (Habshan Camp) and at 138.4km (Al Mirfa). 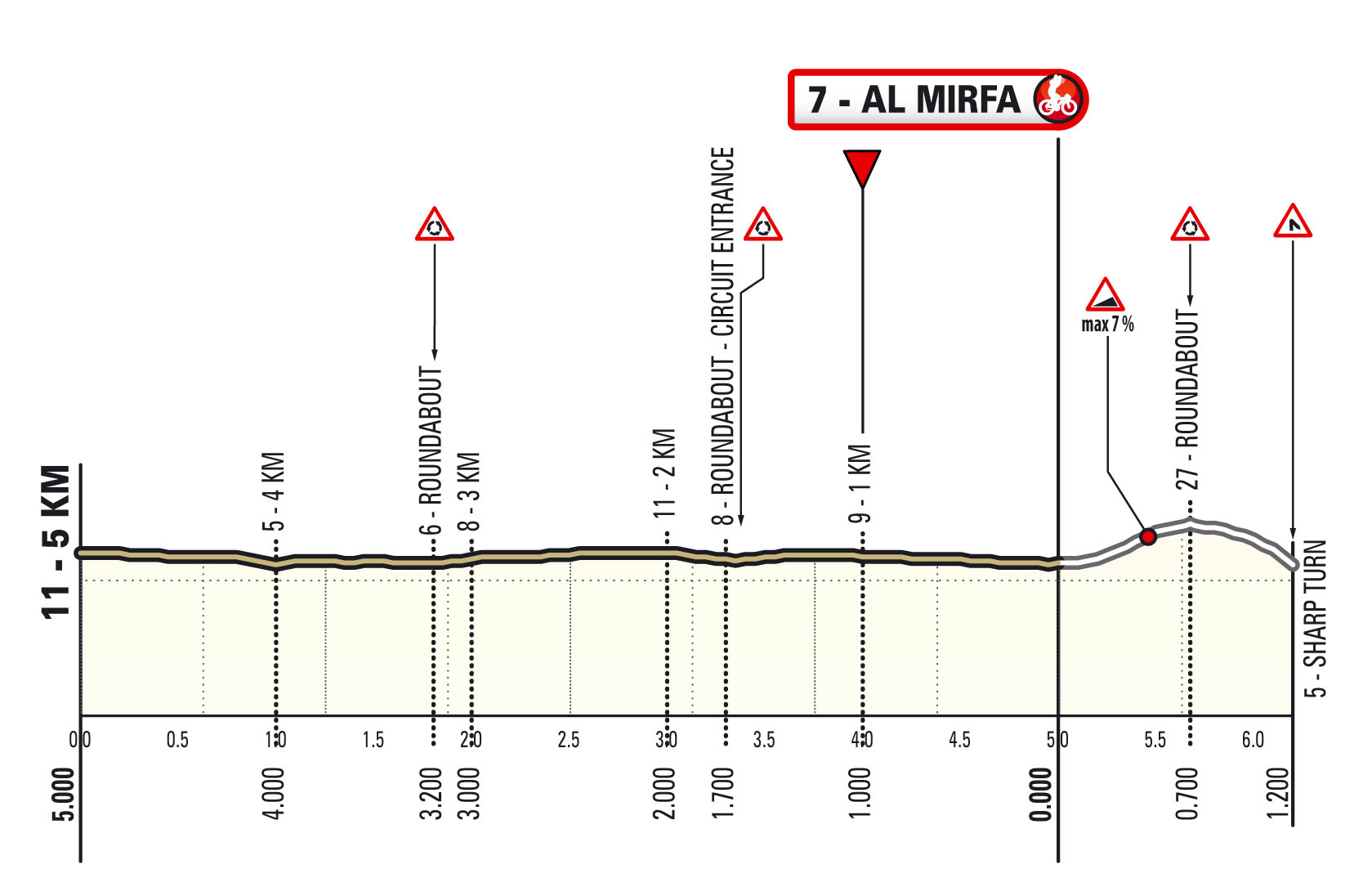 The final kilometers
A final circuit, to be covered twice, on a wide and perfectly paved road that features a few U-turns around roundabouts and a brief climb at the start of the lap. The finish line is positioned on an 8m wide asphalt road.

PRESS CONFERENCE
The post-stage press conference will be live-streamed on the UAE Tour YouTube channel. 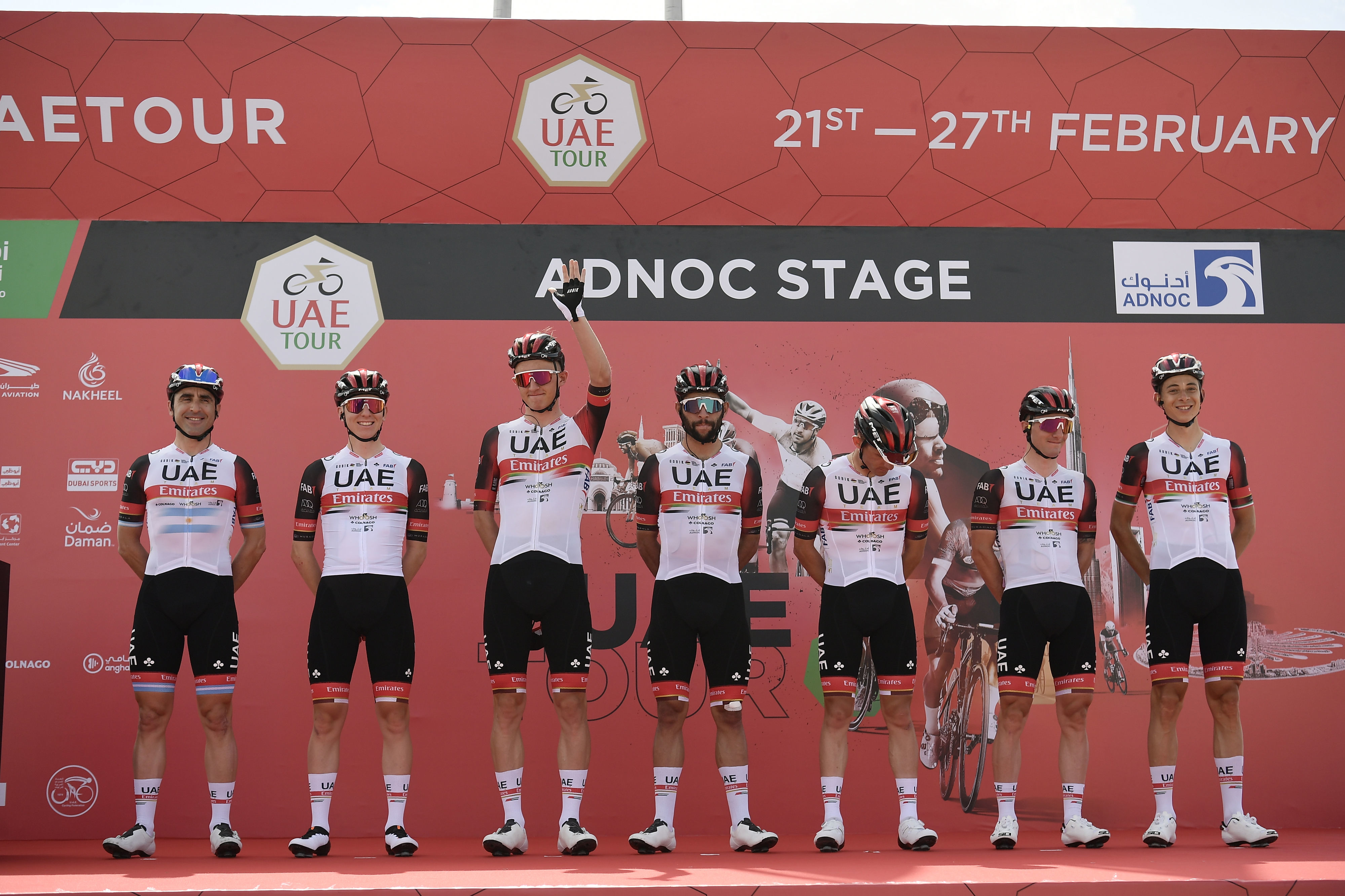 CITY MALL MADINAT ZAYED – 145 KM TO FINISH THE LINE
The Madinat Zayed Shopping Centre is the place to go for international retail shopping, at the heart of the city. The Madinat Zayed Shopping Centre offers a wide array of brands and stores that offer the discerning shopper everything from high-end fashion, perfume, household goods, groceries, electronics and lots more.

MADINAT ZAYED – 145 KM TO FINISH THE LINE
It is the largest town and the administrative centre of Al Gharbia, the westernmost and largest region in the Emirate of Abu Dhabi. The township was established in 1968 by Sheikh Zayed bin Sultan Al Nahyan. Madinat Zayed is home to Al Dhafra FC, a team that competes in the UAE top division football league, the UAE Pro League, and Al Dhafra futsal club.

The mission of ADNOC Schools are to prepare Emirati and other students, through an academically rigorous curriculum, to achieve their highest potential in a global, technologically advanced society, where Arabic and Islamic values are honoured and cultural differences are respected.

SIR BANIYAS ISLAND – 176 KM TO FINISH THE LINE
A nature-based destination alive with wildlife and adventure activities, a 5-star boutique hotel, luxury villas, purpose-built stables and historical sites, Sir Bani Yas Island is one of the eight which make up the Desert Islands in Al Dhafra.

Recently awarded the ‘World’s Leading Sustainable Tourism Destination’ at the 2014 World Travel Awards in Anguila, more than half the island is made up of the Arabian Wildlife Park, one of region’s largest wildlife reserves, which is home to more than 10,000 free roaming animals including Arabian Oryx, gazelles and giraffes, hyenas and cheetahs. Guests can take a 4×4 Nature & Wildlife Drive of the park in specially made vehicles accompanied by expert guides.

The island is also home to UAE’s only discovered Christian monastery, which can be visited during a Desert Islands Resort & Spa Culture Tour. Believed to have been built around 600 AD, and abandoned in 750 AD, the monastery was initially discovered during excavations in 1992.

RUWAIS MALL
Located some 250km west of Abu Dhabi city, Ruwais Industrial and Housing Complex is developed by Abu Dhabi National Oil Company (ADNOC) as a major contributor to the national economy and represents a series of multi-million-dollar investments by the company. From a small fishing headland, Ruwais today is one of the most modern industrial complexes in the Middle East, home to around 30,000 people of which some 20,000 reside within ADNOC’s Ruwais Housing Complex. Located adjacent to the Ruwais Housing Complex, Ruwais Mall will be the only community shopping mall catering to the Western Region. The Mall will house retails stores along with a variety of leisure and entertainment facilities aiming to attract an affluent clientele.

AL MIRFA BEACH – 0 KM TO FINISH THE LINE
This stunning spot is one of Abu Dhabi’s best-kept secrets. Home to the Al Dhafra Watersports Festival, this is the Al Dhafra area’s only developed beach. It’s almost never crowded and there is a small town nearby where you can buy supplies for a night of camping or snacks and games for a day out enjoying the turquoise waters