Jebel Hafeet, the first summit finish of the race, awaits the riders.
The post-stage press conference will be live-streamed on the UAE Tour’s YouTube channel.

This morning, Ismail Abdulla, CEO of Strata Manufacturing got Stage 3, the Strata Stage, underway and said: “Strata Manufacturing’s strategic sponsorship of the UAE Tour’s third stage aligns with our ambitions of working with different entities for life to get back to normal through sponsoring this major sport event. Having been established in Al Ain – the heritage heartland of Abu Dhabi – just over a decade ago, it is humbling to know Strata’s advanced N95 masks will be worn by the UAE Tour’s local, regional and international racing teams. We are honored to be playing our part in raising the UAE flag at this prestigious global sporting event.”

Strata Manufacturing (Al Ain), 23 February 2021 – Good morning from Stage 3, the Strata Stage, of the third edition of the UAE Tour (21-27 February 2021), the one and only WorldTour race in the Middle East. The third stage is a classic mountain stage of the UAE Tour and features the first summit finish of the race atop Jebel Hafeet. The 10km ascent will be the first big General Classification test for the riders. 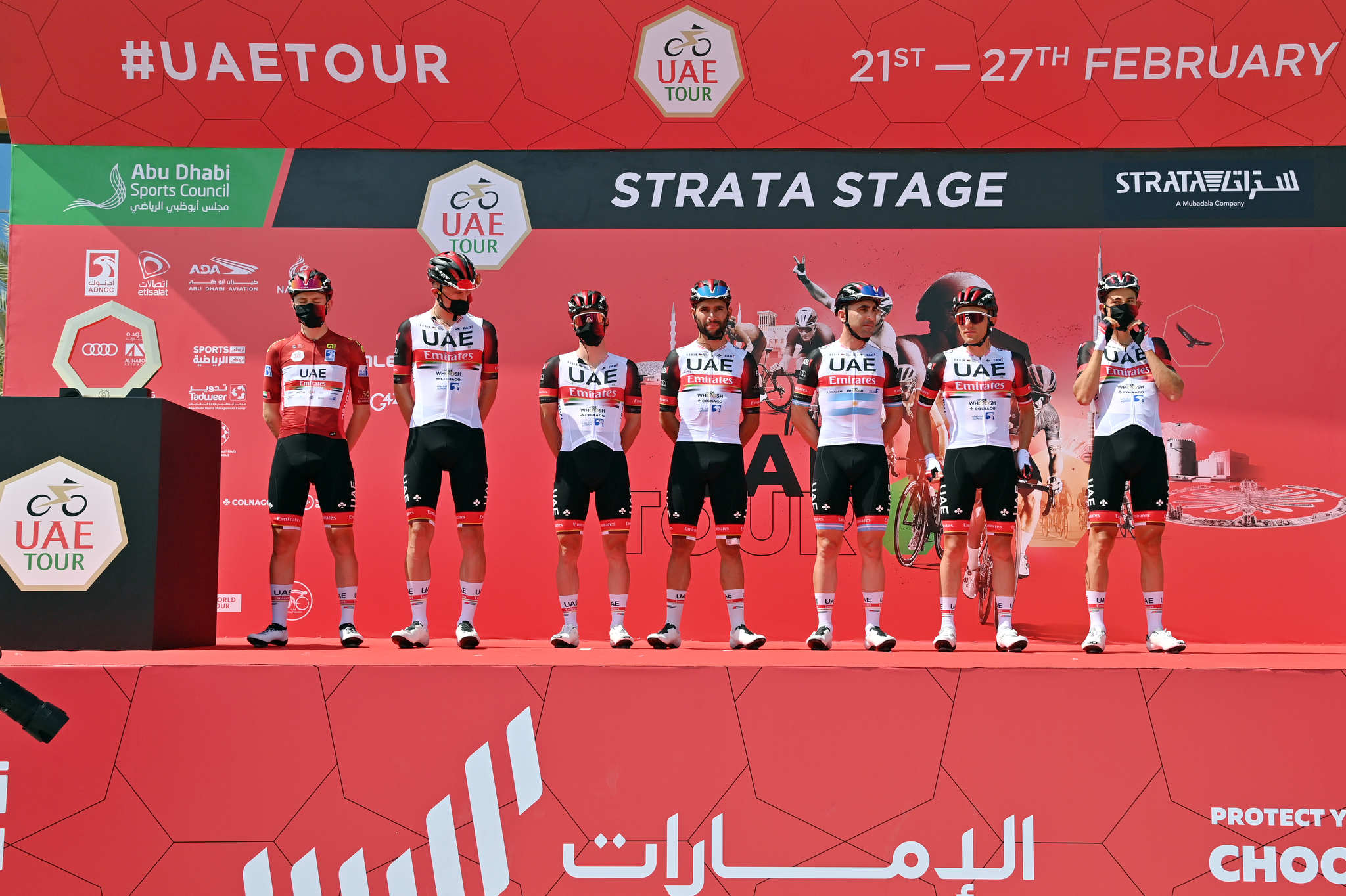 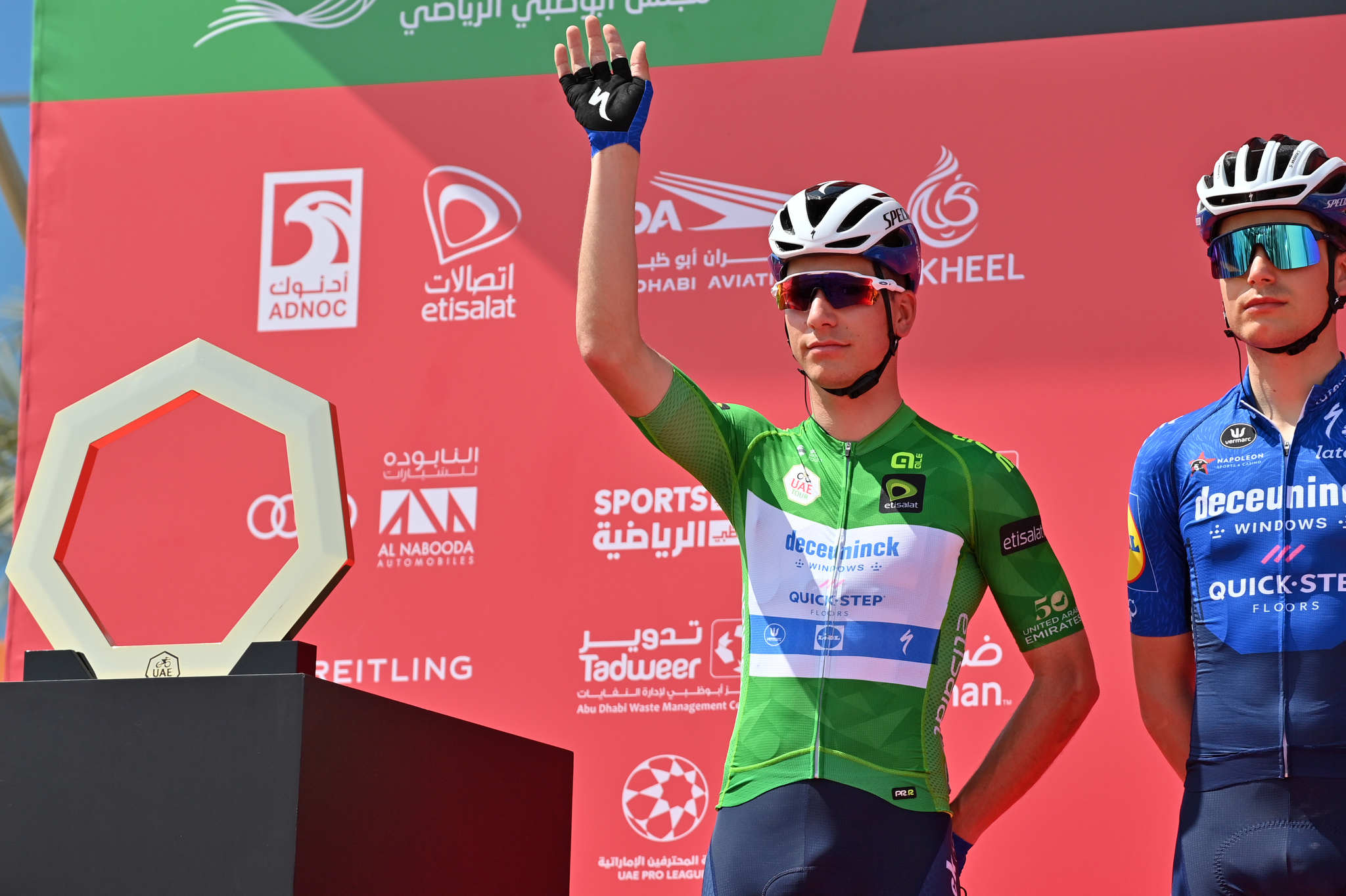 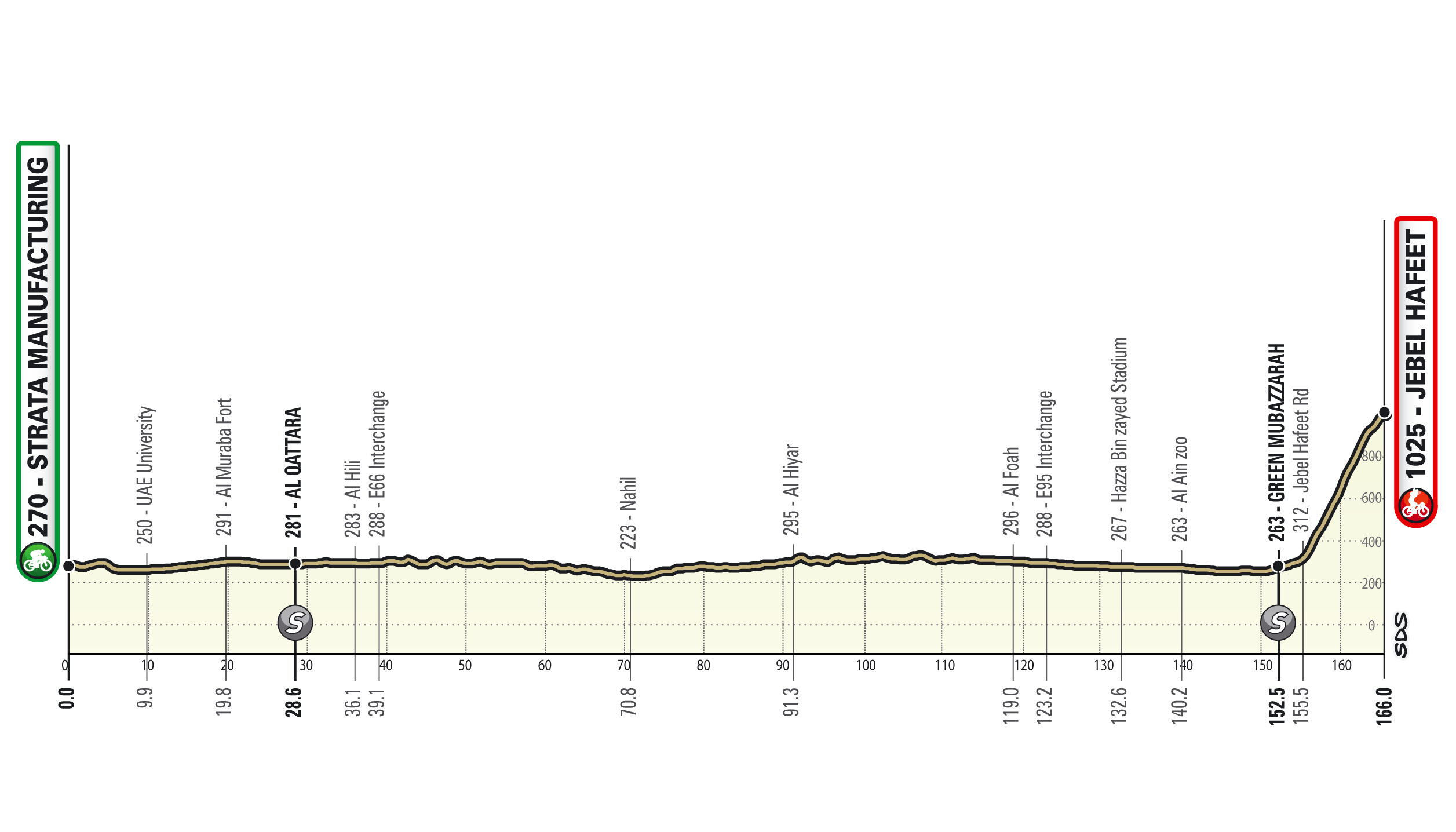 Stage 3 is a classic mountain stage of the UAE Tour. Setting off near the Al Ain international airport, the peloton will follow a well-ridden route around Al Ain that takes in the sights (Al Ain Zoo, Al Qattara, Al Hili and the Al Ain Oasis) before arriving at the Green Mubazzarah park where the final climb of Jebel Hafeet begins. The 10km ascent will be the first big General Classification test for the riders. Two intermediate sprints: in Al Qattara (km 28.6) and Green Mubazzarah (km 152.5). 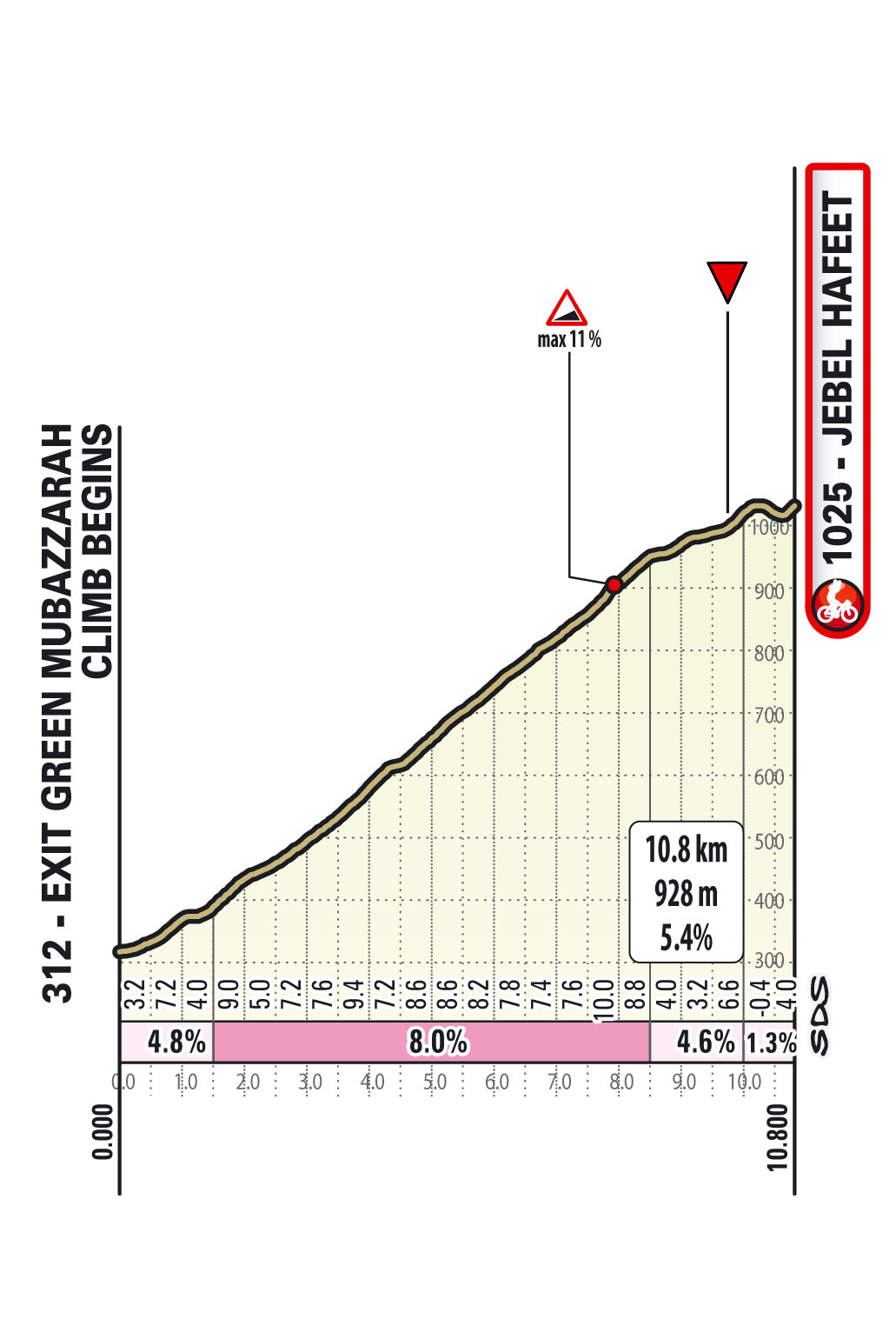 The final kilometers
A final climb that twists and turns along a wide 3-carriageway road. The gradient largely rests at 8-9%, hitting 11% around 3km from the finish. A very short descent awaits the riders in the final kilometer before one last ramp up to the line. A straight finish, on asphalt.

TADWEER AND THE UAE TOUR
As part of its support for the UAE Tour as a key sponsor, Tadweer has deployed a team of 161 managers, supervisors, inspectors, drivers, and cleaning workers, providing the latest equipment including 35 vehicles and 155 waste bin to ensure that the UAE Tour runs smoothly and in a safe and healthy environment.

His Excellency Dr Salem Al Kaabi, Director General of Abu Dhabi Waste Management Center (Tadawer): “Tadweer’s strategic participation in various events hosted by Abu Dhabi comes as part of the center’s priority to contribute to the success of these events. With an emphatic participation in this major sporting event, we aim to ensure a clean, healthy, and safe environment for all participants in a manner befitting Abu Dhabi’s status as a prominent global destination for hosting high-caliber international events.” 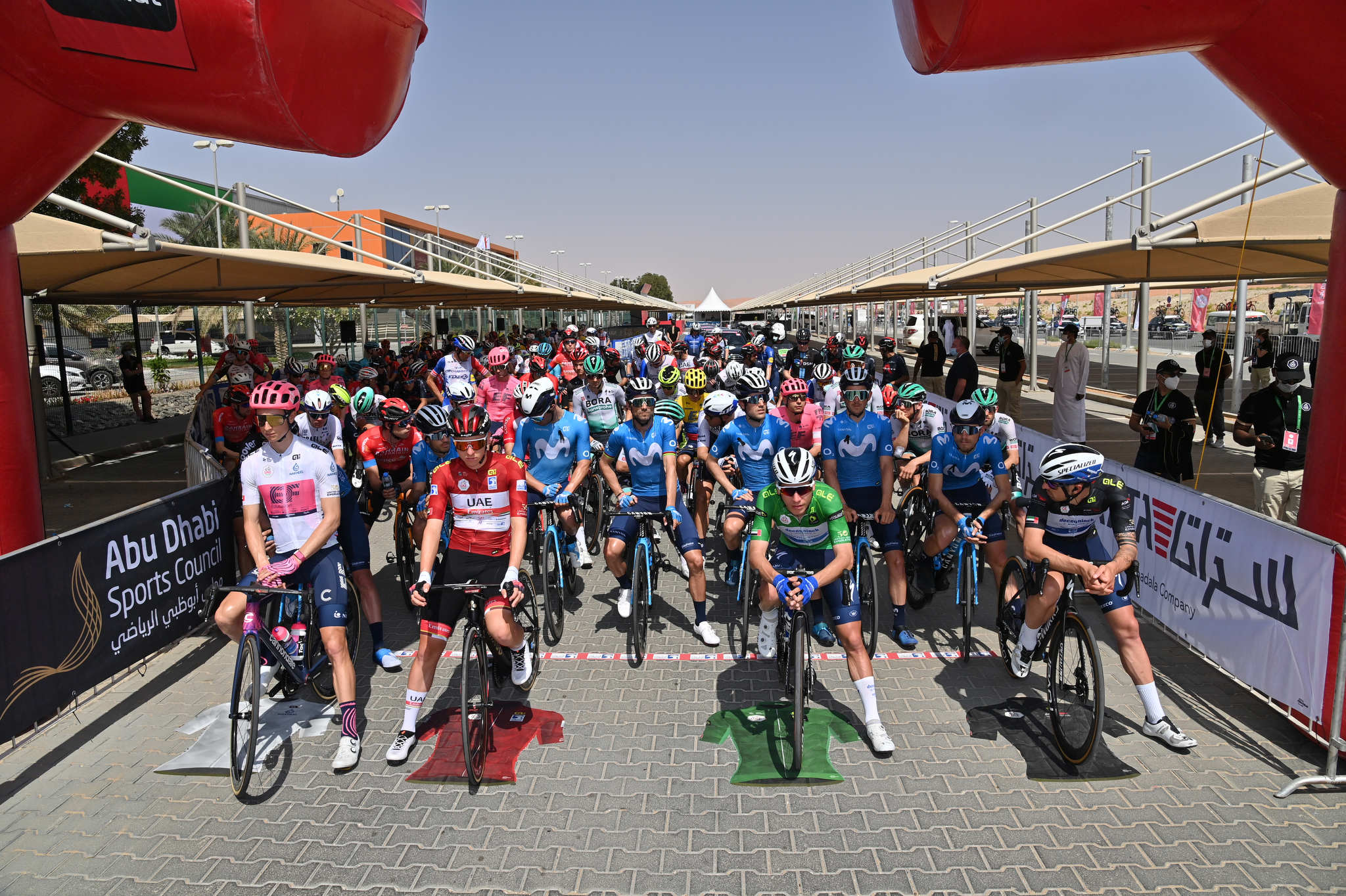 STRATA MANUFACTURING – 166 KM TO FINISH LINE
Strata Manufacturing – Strata – is a composite aero-structures manufacturing facility based in Al Ain, United Arab Emirates. Established in 2009, with production beginning in 2010, Strata has partnerships with the world’s leading aircraft manufacturers, Airbus and Boeing.

HAZZA BIN ZAYED STADIUM – 160 KM TO FINISH LINE
The home of Al Ain FC, this 25,000-seat stadium is one of Al Ain’s tallest buildings and a recognizable landmark. The outer façade design of this stadium is inspired by a palm tree trunk, an integral part of the UAE’s heritage and culture. The stadium is part of a wider project, constructed in phases, which will ultimately include residential, commercial, and entertainment areas, as well as a luxury hotel and sports facilities.

QASR AL MUWAIJI – 148 KM TO FINISH LINE
The historic Qasr Al Muwaiji – birthplace of His Highness Sheikh Khalifa bin Zayed Al Nahyan, President of the UAE – has been restored to its former glory and reopened to the public as a museum and permanent exhibition. Located in the centre of Al Ain city, Qasr al Muwaiji is an impressive structure that has watched over the oasis for more than 100 years. Built in the early 20th century, this simple but striking building was originally used as a diwan (a council or seat of governance) and as a place for the community to congregate.

AL AIN OASIS – 146 KM TO FINISH LINE
In the heart of the city, the Al Ain Oasis has been opened as the UAE’s first curated UNESCO World Heritage site visitor experience. Spread over 1,200 hectares (nearly 3,000 acres) and containing more than 147,000 date palms of up to 100 different varieties, this impressive oasis is filled with palm plantations, many of which are still working farms.

AL AIN PALACE MUSEUM – 146 KM TO FINISH LINE
Located on the western edge of Al Ain Oasis, the Palace of the late Sheikh Zayed bin Sultan Al Nahyan was built in 1937. It was converted into a museum in 1998 and opened to the public in 2001. The original structure comprised a private residence for the ruler and his family within a complex of courtyards. The architectural design and construction of Al Ain Palace is typical of historical buildings of the UAE. It features the characteristic ventilation structures that are designed to keep the buildings cool in the summer.

AL JAHILI FORT – 146 KM TO FINISH LINE
Al Jahili Fort is one of the UAE’s most historic buildings. It was erected in 1891 to defend the city and protect precious palm groves. The former headquarters of the Oman Trucial Scouts, the force that protected the mountain passes and kept inter-tribal peace, it also served as a residence for the local governor. It is set in beautifully landscaped gardens, and visitors are encouraged to explore it.

SOUQ AL QATTARA – 137 KM TO FINISH LINE
Dating back to the mid-20th century and founded by the late Sheikh Shakhbut bin Sultan Al Nahyan on the palm-lined road linking Al Ain’s Al Qattara and Al Jimi oases, the historic Souq Al Qattara has been renovated and re- opened. A traditional handicrafts market takes place here every Thursday, Friday and Saturday from October to May, encouraging local families to pre- serve and promote Abu Dhabi’s heritage through an active involvement in traditional craft production. The Souq is linked to the redeveloped Al Qattara Fort, now home to a popular arts center, featuring hundreds of modern exhibits, workshops, a café and a library.

SHEIKH KHALIFA BIN ZAYED GRAND MOSQUE – 145 KM TO FINISH LINE
The Sheikh Khalifa Bin Zayed Grand mosque, also known as Al Ain Grand Mosque, will be able to accommodate 20,000 worshipers. It is composed of a basement level and ground floor and will also include a 160-meter-wide dome that will cover the main prayer hall and four 60-metre-tall minarets. The complex will also include other buildings for classrooms and offices, as well as underground parking.

AL AIN ZOO – 25 KM TO FINISH LINE
This 900-hectare park near the base of Jebel Hafeet is where visitors can see a large animal collection in enclosures that closely resemble their natural habitats. There are plenty of green public spaces for picnics and playgrounds, a cafeteria and a train tour of the wildlife area. The Al Ain Zoo is home to over 4,000 animals, with at least 30% of its 180 species considered endangered. Conservation efforts have been strengthened by partnerships with San Diego Zoo, the Fairchild Tropical Botanical Garden in Miami, and the World Association of Zoos & Aquariums.

GREEN MUBAZZARAH – 14 KM TO FINISH LINE
Strategically located at the feet of the Jebel Hafeet Mountains, Green Mubazzarah is home to a number of spending Chalets that make a great retreat away from the noise of the metropolis providing guests with a deluxe lodging and intimate access to the great outdoors.

JEBEL HAFEET – 0 KM TO FINISH LINE
Rising 1,240 meters, Jebel Hafeet is the emirate’s highest peak, and the UAE’s second. This towering rocky mountain, which stands guard over Al Ain and borders Oman, is forged out of craggy limestone that has been weathered over millions of years. Once you reach the top, you’ll be rewarded with magnificent views over Al Ain.