The Dutch champion wins in Al Mirfa after a wind-affected spectacular ADNOC Stage.
Todays’ stage video highlights are available to download below (digital media only / NO broadcast)

Al Mirfa, 21 February 2021 – Mathieu van der Poel warned that he’d be racing the UAE Tour in support of his Alpecin-Fenix teammates but he found himself at ease in the echelons on Stage 1, – the ADNOC Stage – a day that was marked by an unexpected scenario. Among the pre-race GC favorites, Adam Yates, Tadej Pogačar and João Almeida made the decisive 23-man front group, the latter taking six seconds of time bonuses by winning the two intermediate sprints during the stage. Top sprinters Elia Viviani and Fernando Gaviria were also up at the front but Van der Poel was the strongest at the finish despite recently switching (with no respite) from the cyclo-cross world championship to WorldTour road racing, both events being held in a sandy environment with a beach-side finish however.

Tomorrow, Matthieu Ladagnous (Groupama – FDJ), will be the first rider to start at 13.45′ Stage 2’s time trial. The last one will be the Red Jersey Mathieu van der Poel at 16.13′. 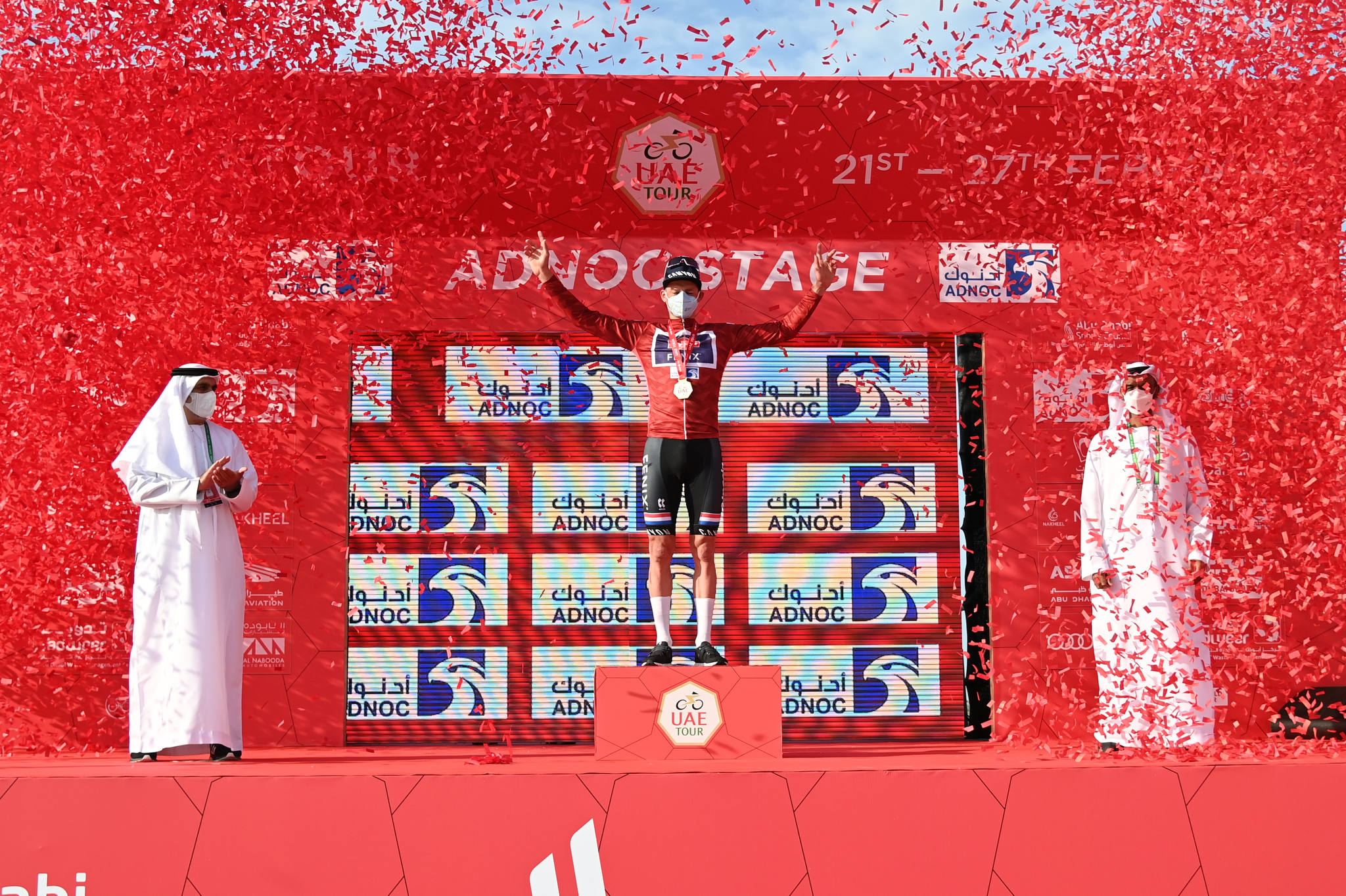 Data collected by Velon’s devices on the riders’ bikes tell a detailed story of the stage. An infographic about today’s stage can be downloaded here. 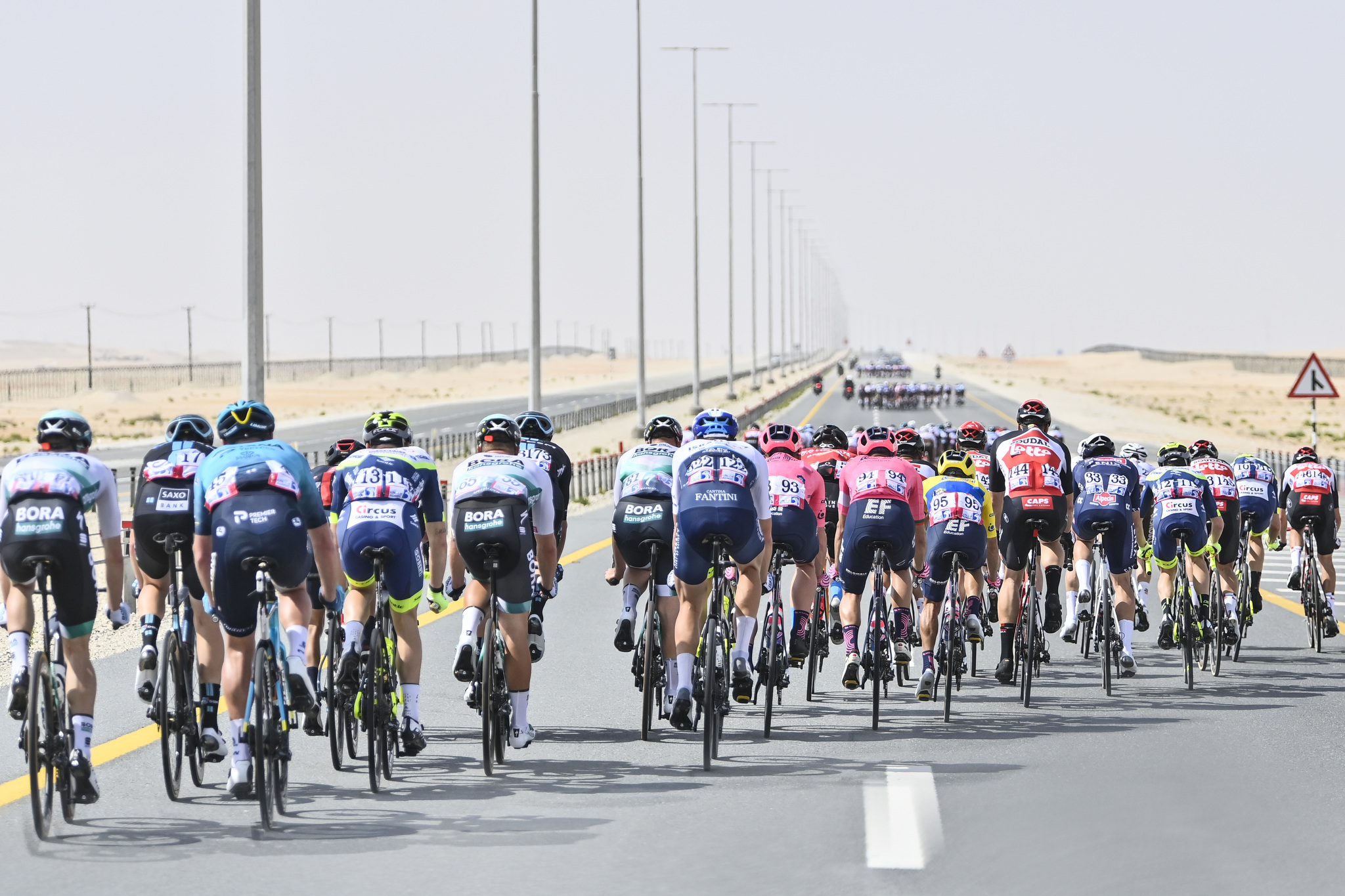 PRESS CONFERENCE
Stage winner and first Red Jersey wearer of the race Mathieu van der Poel said in the press conference: “It was really unexpected to be honest but it was windy from the beginning onwards. I was immediately in the first echelon and I felt good. But then, with the head wind, we regrouped with the peloton and the bunch split again after the intermediate sprint. I was able to catch the first group and it was very hard racing until the finish line. It was good to have teammates in the front group, especially Gianni [Vermeersch) who helped me a lot at the end because Roy was dropped a little bit before. Gianni did an amazing job again covering moves in the finale.
I still felt really good for the sprint. I knew I just had to start sprinting when I thought it was the right moment to go. The hard racing was good for me for the sprint. Normally there were a few guys faster than me but the heat made it a very hard race as well. That gave me confidence that I could go for the sprint, which wasn’t the plan before. I didn’t expect such a stage and such a result at all. I had a rest after the cyclo-cross world championship and I started training with the team one week before coming to the UAE. So I think it’s my cyclo-cross form that’s made me a winner today.” 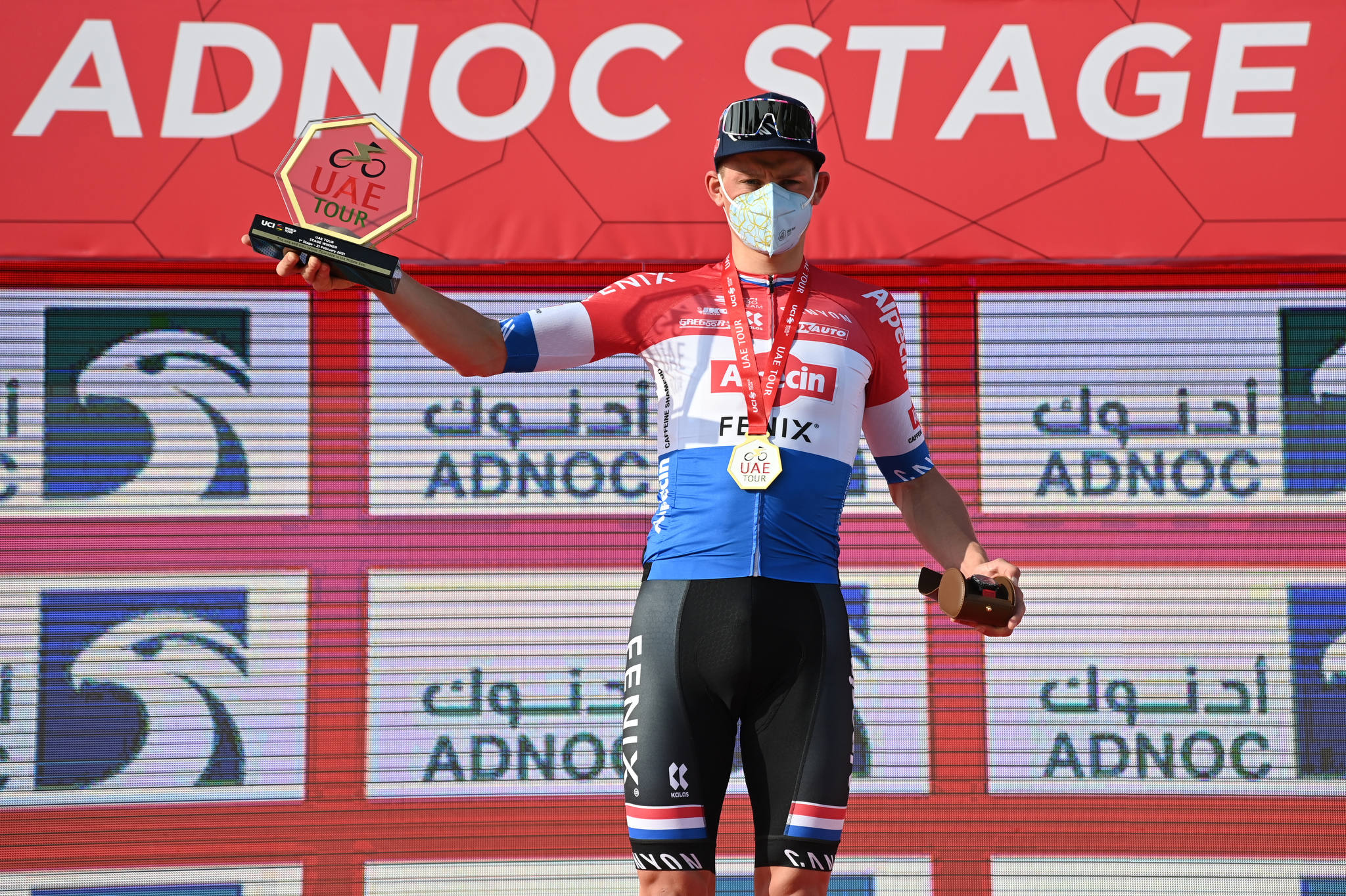 The Black Jersey João Almeida said: “No one expected the race to be like that. At the end we had five guys in the right spot. This is a 7-day race, there aren’t many climb and the time trial is quite short too so I tried to go for the time bonus because every second is important. We kept going hard and it worked out. Winning the UAE Tour isn’t that easy but some GC contenders are now four minutes down. Tadej Pogacar and Adam Yates are obviously in good shape because you need good legs to make the front group in a race like this. Which one of us is the best time trialist for the UAE Tour? We’ll find out tomorrow”.

The White Jersey David Dekker said: “Normally I’d be disappointed with second place but this is my first race with Jumbo-Visma and my first WorldTour so it’s a good result and it wasn’t really that close with Mathieu van der Poel. I’m satisfied. I was watching Gaviria, Van der Poel and the Deceuninck-Quick Step team. I knew it would be up to me to be in a good position. I helped my teammate Chris Harper in the last two kilometers, and then it was about finding a good position and seeing if I was strong enough for the sprint. I’m definitely a sprinter but maybe today I also showed that I’m capable of doing more than just waiting for the sprint. At this stage of my career, I’m focusing on bunch sprints”.

TOMORROW’S STAGE
Stage 2, Hudayriyat Island ITT (13km), the Abu Dhabi Sports Council Stage
An individual time trial that takes place entirely on the island of Hudayriyat along a very fast route characterized by wide, sweeping bends. The road is perfectly flat and wide, with gentle curves that will allow the riders to maintain a fast pace throughout (wind permitting). 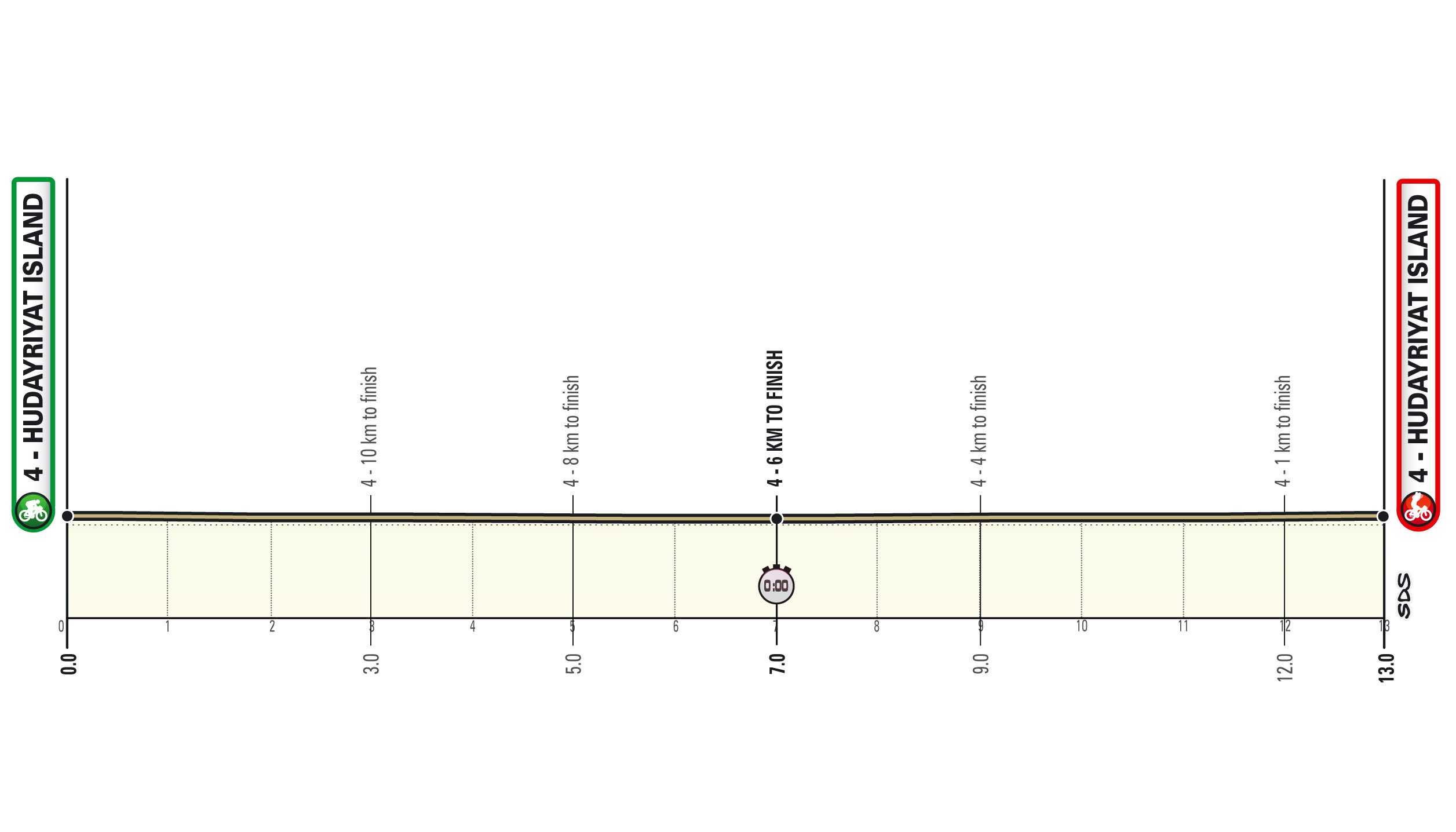 The final kilometers
Sweeping bends on a wide and smooth road. The finish line is on asphalt. 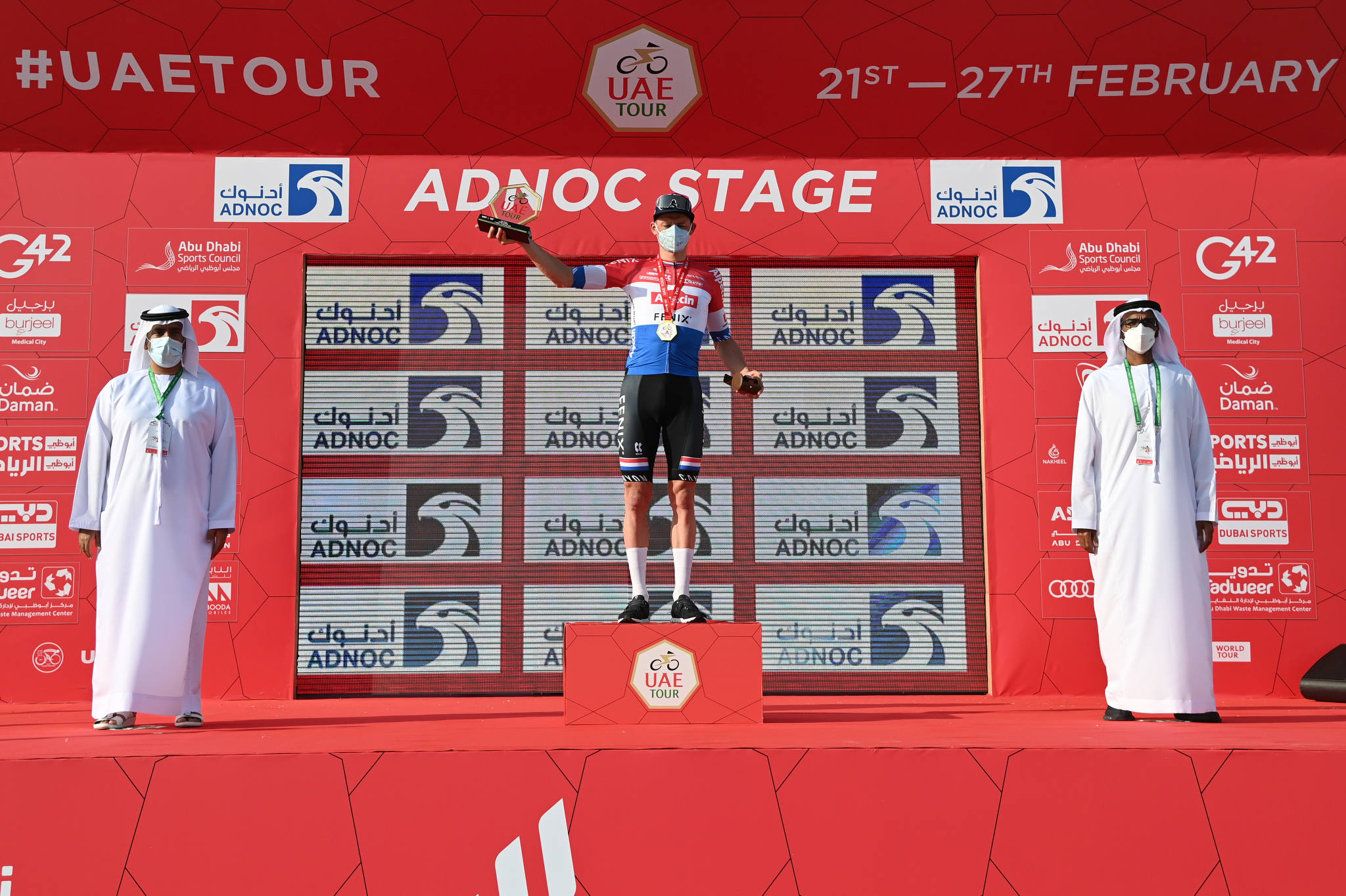